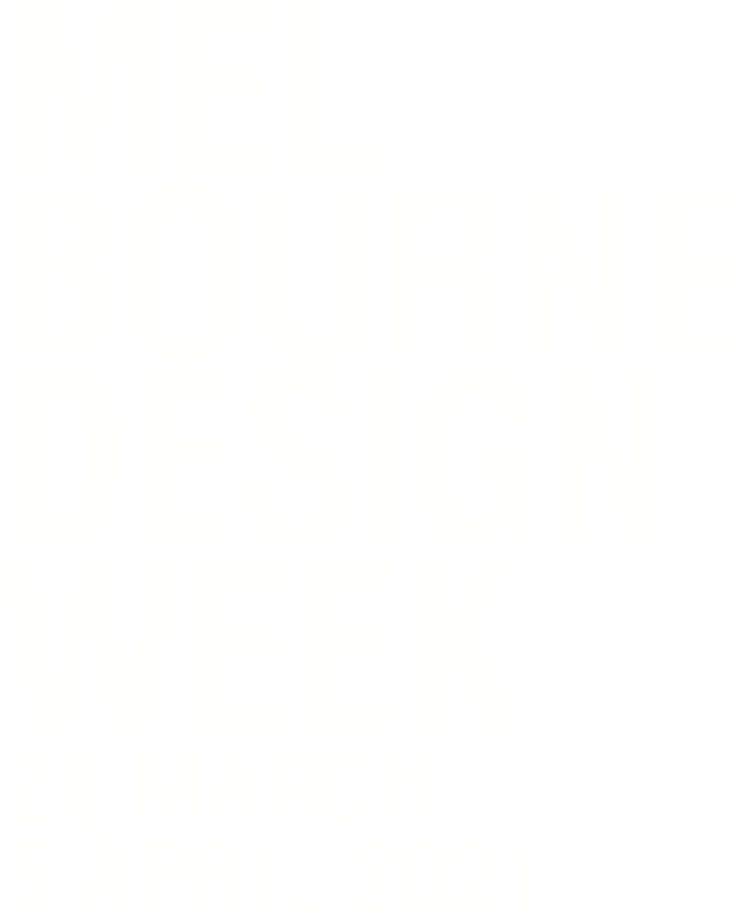 Design
the world
that you
want

Normal is over. The tumult of 2020 continues to demonstrate how the issues of our time – climate, public health and social justice – are intertwined. Let’s look towards the world we might make together.

Theme:
Design the world that you want

A critical role of design is to imagine and create alternative worlds with inventions, products, services, environments, materials and processes that respond to current issues and improve the quality of life for everyone. In 2021, Melbourne Design Week asks: Which world will we make together when we know tomorrow will be very different to today?

Take care to design the world that you want.

Expressions of interest for the 2021 program have now closed.

Designing with care requires more empathy in the design process to sense the emotional needs and conditions of others. Designing with empathy requires awareness and sensitivity. Empathy builds trust; it engages stakeholders, and it leads to better outcomes. The design sector demonstrates that it cares by contributing to emergency responses to bushfires and COVID-19 from adapting supply chains and production lines to creating designs geared towards the public good. The events of 2020 have highlighted the need for greater care, from the design of the healthcare system to the broader world of products and services that could shape a more empathetic future.

A design community is one that creates together: sharing resources, collaborating across disciplines, disseminating knowledge and embracing new cultures across geographies and generations. As much as the community is bound by the objects, materials and techniques it uses, designers also form communities through social, cultural and economic values. From gaming to craft, from communications to landscape architecture, design brings us all together. What are connections we need to be making and conversations we need to be having right now?

Mediating the effects of climate change is the design challenge of this generation. An increase in the intensity of natural weather events, including floods, storms, bushfires and drought, may lead to further conflict and socio-economic inequality. How can designers best intervene in this space, to collaborate across businesses and disciplines with wild creativity? This focus continues Melbourne Design Week’s previous exploration of waste, supply chains, manufacturing, materials and speculative design proposals. The problems of climate change are not going away; but, accepting human activity has reshaped the environment, we are hopeful that we have the shared vision to adapt as positively as we can.

Melbourne Design Week is an annual 11-day program of talks, tours, exhibitions and workshops that celebrate and interrogate design in its broadest sense. The program offers an opportunity for designers and businesses spanning the many and varied disciplines, to come together to share ideas, show new work and consider how design can be used as a force for good in an increasingly complex and precarious world.

An initiative of the Victorian Government through Creative Victoria, and delivered by the National Gallery of Victoria (NGV), the inaugural Melbourne Design Week was launched in 2017. Curation of the program is led by the NGV Department of Contemporary Design and Architecture team; Ewan McEoin, Simone LeAmon and Myf Doughty alongside Timothy Moore, Director of Sibling Architecture.

Melbourne Design Week is curated into two streams; core programming of local and international exhibitions and keynote presentations hosted by NGV, and the Satellite program which is made up of events and exhibitions independently organised and hosted by the broader design community. The Satellite program makes up 90% of the Melbourne Design Week program with events held at ateliers, studios, retail spaces, universities, galleries and public spaces throughout Melbourne and greater Victoria. Prospective participants develop submissions in response to a provocation set by Melbourne Design Week curators that addresses key issues facing designers and populations around the world. In 2021, Melbourne Design Week asks the industry to propose events and exhibitions that respond to the provocation: Design the world that you want. Participants are called to consider how we might work together to create a better, healthier future for the planet and its inhabitants.

The program is built on the enthusiastic engagement and participation of the design sector and the general public. Since 2017 the program has grown in scope and scale from just under 100 programs in 2017 to over 300 in 2020 making it Australia’s largest international design event. We look forward to another four years of talking, making, sharing, imagining and listening.