Menu
Television soon became a powerful source of imagery to use and interact with, and artists came to respond to and create their own language of video editing, either using television footage or for broadcasting on television itself. The ‘jump cut’ technique, allowing for abrupt transitions that disrupt the continuity of images and make the subject appear to move from one place to another was of particular interest, lifting the restrictions of the dominant narrative-driven one-shot technique of early documentary-style cinema. The opportunity to cut and break footage allowed for narratives to be disturbed and for a new and kinetic energy to emerge. 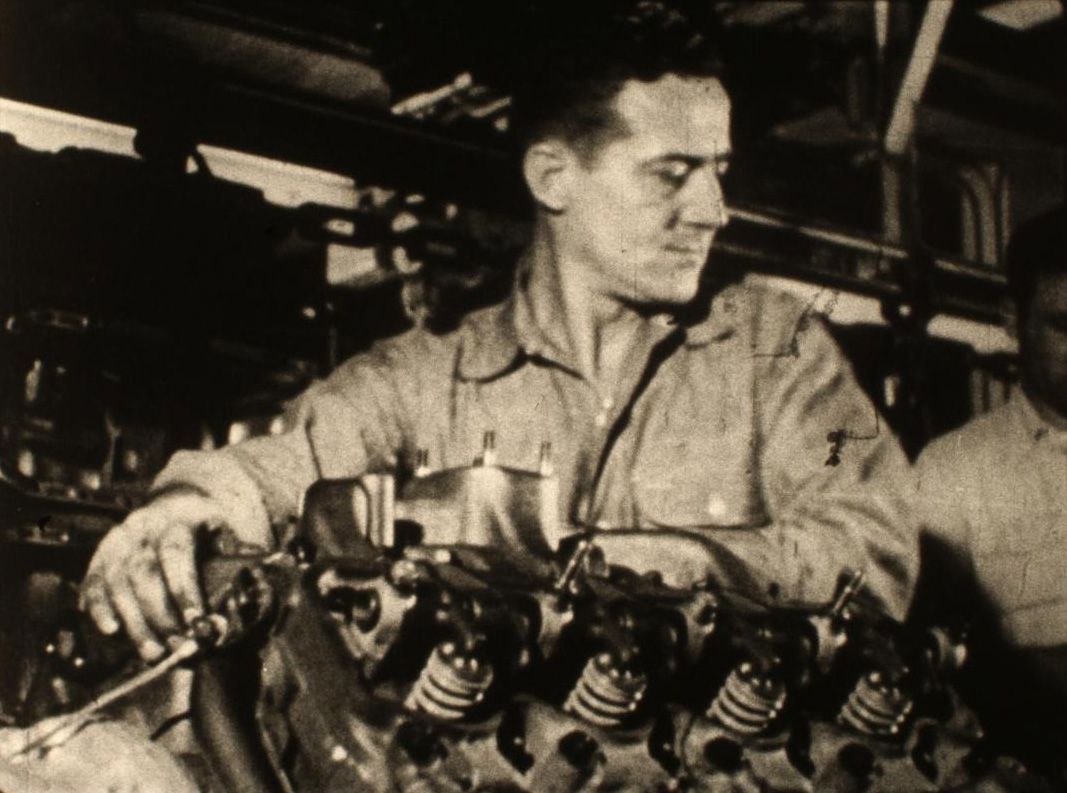 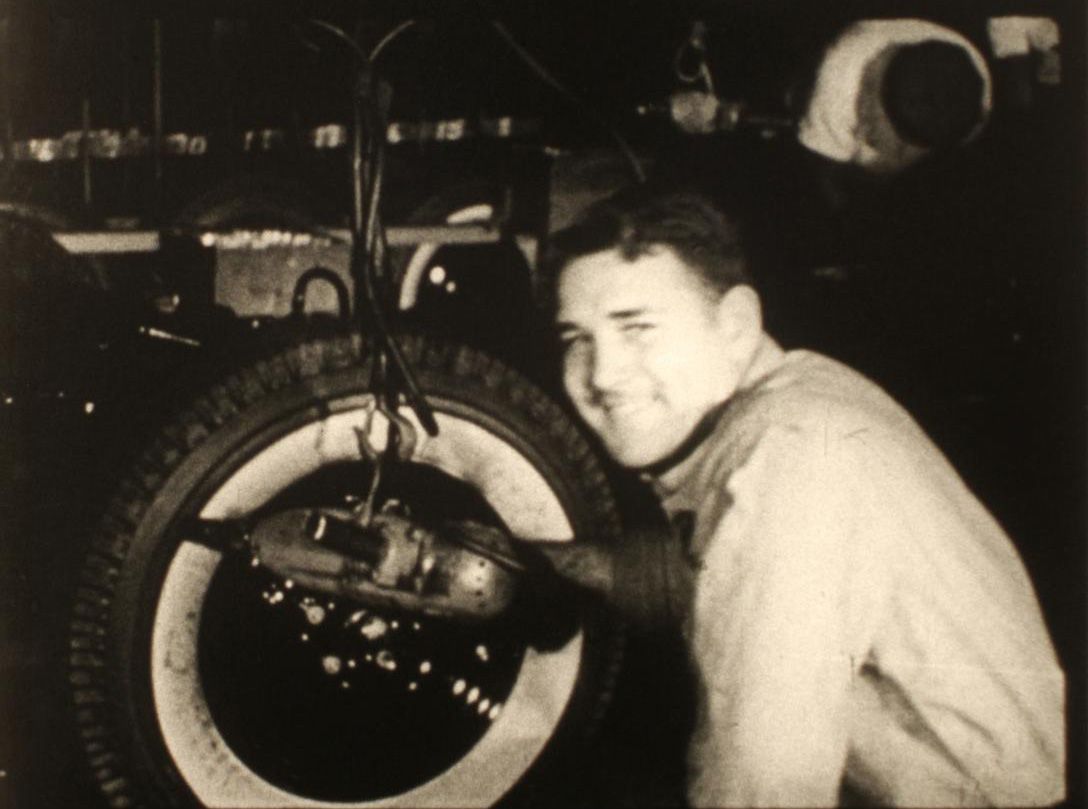 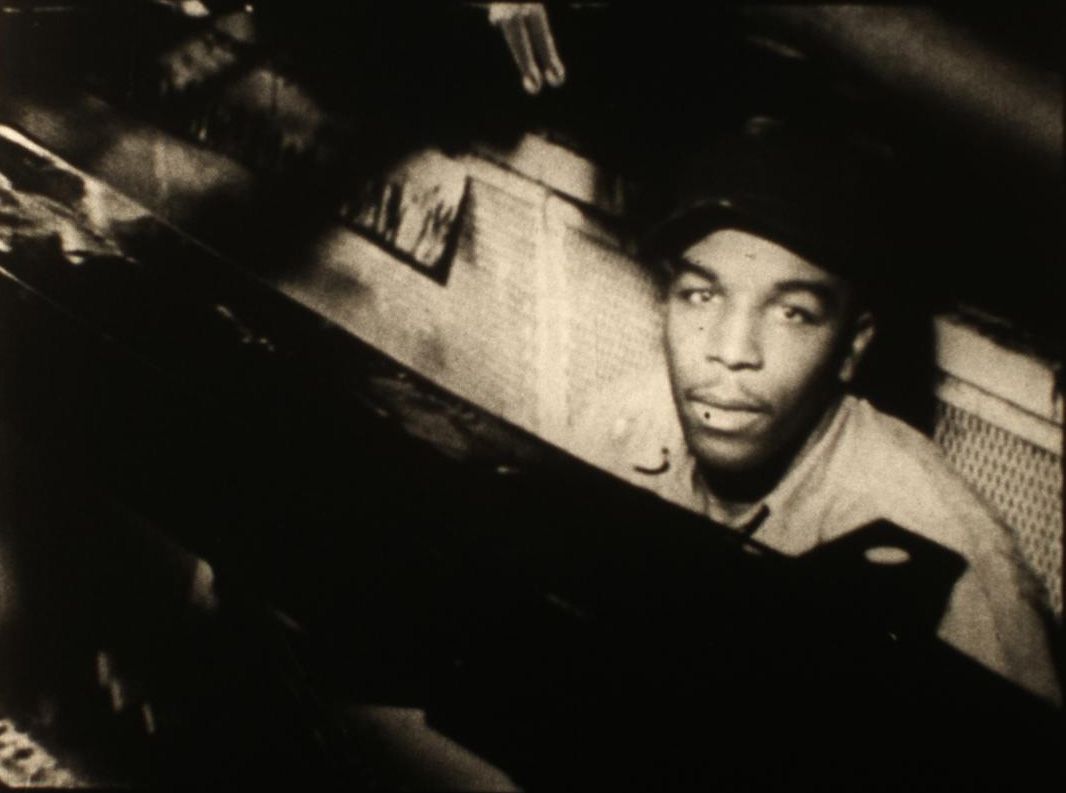 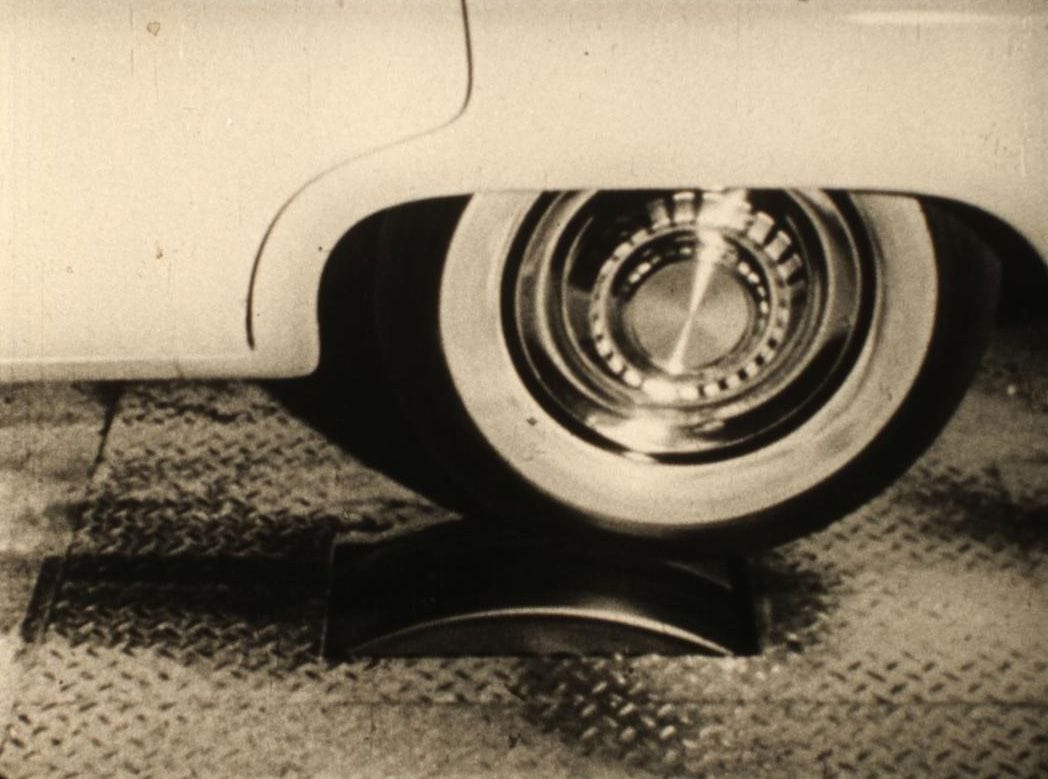 Len Lye was a pioneer of the jump-cut technique in commercial television. Rhythm, 1957, the earliest work included in Transmission, is a brilliant example of this manual editing technique used to dynamic effect. Lye used his knowledge of producing experimental and documentary films to create the short film, which was intended originally for television broadcast for the Chrysler Corporation’s weekly television program in the United States. The artist’s biographer, Roger Horrocks, has described how Lye was commissioned by James Manilla, an advertising executive of McCann-Erickson, to come up with an idea for ‘an experimental something’ between one and two minutes long. Manilla assisted Lye in obtaining more than one hour’s worth of black-and-white documentary footage of an in-house film shot for Chrysler of the making of a car from start to finish (including the offcuts). In a radical move for the time, Lye then manually cut together scenes he described as having ‘a good, definite, contrasty quality’ using dramatic jump cuts, so that the assembly of the car appeared sped up.1 The spliced footage was overlaid with a soundtrack of traditional African tribal drumming and chanting, creating an extraordinary syncopation between the footage and music, content and effect. Filmmaker and writer Brett Kashmere has noted Lye’s political interests in working conditions and the racial issues of the day: ‘Signalling Lye’s blue-collar background and another subtle sign of his attendance to racial issues, the film includes and abbreviates the image of a winking African-American factory worker’.2 Lye himself is quoted as having attempted to ‘kinetically convey the vitality and romanticism of efficient workers in their everyday jobs’.3 The short film received the New York Art Directors’ Festival First Prize for the year’s best television commercial in 1957 but, interestingly, was later disqualified due to the fact the Chrysler Corporation had never actually broadcast it on television. As Horrocks has written, the corporation was troubled by the shot of the black worker winking at the camera and the use of African tribal music, ‘which seemed out of keeping with the serious business of making Chrysler cars’.4

The use of appropriated imagery creates a similar intensity and seductive rhythm in Mark Leckey’s Fiorucci made me hardcore, 1999. In this work, Leckey cuts and rearranges video footage of British dance culture – commencing with late 1970s Northern Soul and televised dance-a-thons, through to images of ‘Casuals’5 and Hardcore rave parties of the early 1990s.6 Leckey sourced the footage over a two-year period and edited it together on a home computer.7 Covering several decades in time, the imagery is united by a pulsating rhythm that rises and falls throughout the work, with the editing creating an ebb-and-flow effect – a ‘synchronicity that appears to unite youths from a range of decades into a singular baccanalia of sound, fashion, style, drugs and dance’.8
While comparisons have been drawn between Leckey’s editing and the ‘cut-up’ technique espoused by William S. Burroughs as a compositional tool for writing, the artists’ methods differ dramatically. The sense of randomness or accidental structure in Burrough’s work is not present in Leckey’s video. The main shared formal element is, rather, the sense of collage. Indeed, the materiality of Fiorucci made me hardcore as a gathering and uniting of found footage creates a palpable artwork that throbs and glides and glistens. Simon Reynolds has written of Leckey’s extraordinary use of the raw materials

There is an opacity to the found material, an insistent but mute materiality: limb-dislocating contortions, foetus-pale flesh, eyes vacant in trance or stiletto-sharp with vigilant pride, maniacal smiles that split apart the dead grey mask of English ‘mustn’t grumble’ mundanity, faces disfigured with bliss.9

Ideas relating to the construction of culture and identity similarly appear throughout the work of Tracey Moffatt. Between 2000 and 2009, Moffatt worked with film editor Gary Hillberg to create a suite of video collages that focus in on the representation of one scene, one emotion, one action or genre. When cut together the repetition of that type of scene creates an ironic and at times humorous commentary on the ways in which stereotypes are created through the lens of TV and film. Artist, 2000, brings together decades’ worth of representations of an ‘artist’ underscored by a fast-paced soundtrack. Together the visual and audio components paint an insightful and amusing picture of the ways in which artists have been represented (passionate, frustrated, tortured, isolated) on the small screen and in cinema, and through repetition reveals the construction of that representation.

Artist Robert Rooney is highly connected to popular culture and his local environment. As the music scholar John Whiteoak has observed, Rooney

studied, and was genuinely intrigued by, seemingly banal, mass-produced objects from his immediate suburban environment; this, in turn, was tied to a strong awareness of the effect of mass production and mass media on society.10

Rooney once said, ‘I have always preferred to work from secondary sources, particularly mass-media ones, rather than paint or draw from the actual subject’, and television was a recurring and ubiquitous background presence for his work, as described in an artist statement from 1975:

The only time I enjoyed using paint was when I was putting on the white undercoat. The preparation was laborious – up to two weeks to prepare the canvas and a few hours to paint it.

I used to watch television while I painted.11

The work by Rooney featured in Transmission captured images on the TV set using Super-8 film, and excerpts from the footage were then manually cut up and looped together, creating a new, rhythmic collage that seems to exist in an eternal loop.