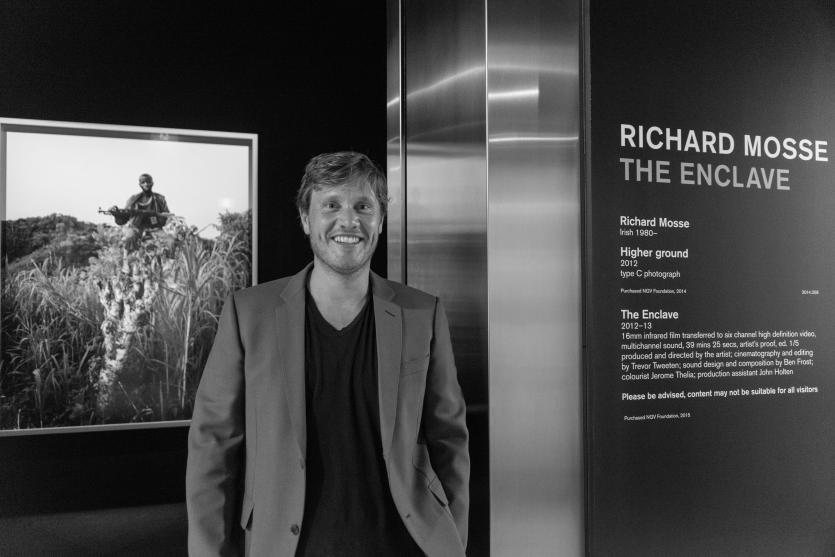 Using a new long-range thermal imaging camera developed for military use, with the ability to record subjects up to 50 kilometres away in total darkness, Irish artist Richard Mosse has created a suite of new works that take as its subject the Syrian Civil War and resulting flood of refugees from that country.

Used for border surveillance and search and rescue, the black-and-white images are produced by Mosse’s camera through registering heat radiation as optical flare. The images represent people in an unfamiliar way, erasing distinctive features, such as their pupils, and making them glow with life-giving heat, creating a tension between alienation and intimacy. Mosse feels that this tension has the potential to give a new visibility to the urgent stories of these people, in contrast to the footage seen widely in the media.

The immersive video installation Incoming, 2015–16, is presented alongside documentation of refugee camps in Greece and Germany. The use of the thermal imaging camera to create works with multiple vanishing points results in an aesthetic that combines landscape traditions of Western and Eastern art history and continues Mosse’s interest in the architectures of conflict and displacement.

Mosse represented Ireland in the 55th Venice Biennale with The Enclave in 2013. He is a recipient of the Deutsche Börse Photography Prize 2014, Yale’s Poynter Fellowship in Journalism, the B3 Award at the Frankfurt Biennial, a Guggenheim Fellowship, a Pulitzer Center on Crisis Reporting grant, and a Leonore Annenberg Fellowship. Mosse’s work has been exhibited internationally, including in solo exhibitions at the Reykjavík Art Museum, Reykjavík; Louisiana Museum of Modern Art, Humlebæk and Foam, Amsterdam and most recently Richard Mosse: Incoming at The Curve, Barbican Centre, London in 2017.

Supported by Christopher Thomas AM and Cheryl Thomas, Jane and Stephen Hains, Vivien and Graham Knowles, Michael and Emily Tong and the 2016 NGV Curatorial Tour donors.