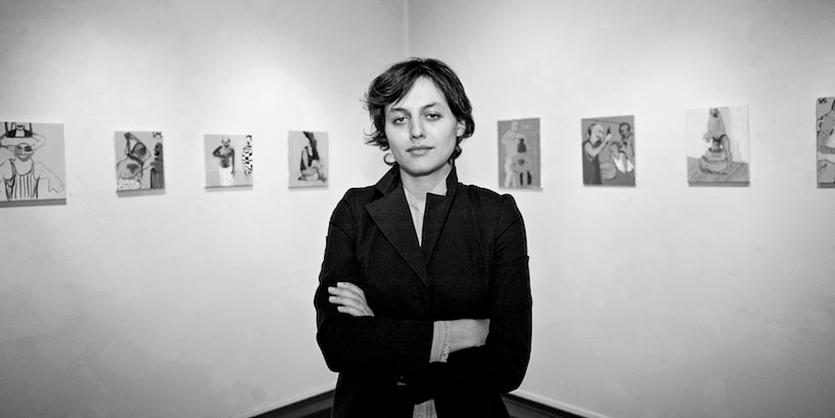 Rich in narrative and irony, Tala Madani’s work depicts darkly comic and often theatrical stories featuring bald, middle-aged men as the main protagonists. In each of the three paintings Primer, 2015, Smiley has no nose, 2015, and Lights in the living room, 2017, any supposed authority of the men is undermined in a critique of power relations, including that of male privilege. Madani upsets art-historical conventions, openly embracing caricature, gags and disarming visual simplicity. Her approach demonstrates a contemporary sense of sequencing, movement and speed influenced by cartoons, cinema, videos and television.

Madani moved from Tehran to the United States in 1994. She has exhibited widely in North America and Europe and her work has featured in international group exhibitions, including the 2017 Whitney Biennial, Whitney Museum of American Art, New York; Made in L. A. at the Hammer Museum, Los Angeles in 2014; the 54th Venice Biennale in 2011; Greater New York at MoMA PS1, New York, in 2010; and The Generational: Younger Than Jesus at the New Museum, New York, in 2009. Her solo exhibition First Light was presented at the Contemporary Art Museum St Louis, and MIT Visual Arts Center, Cambridge, in 2016.