Living on the sea surrounded by the sea

Kyriaki Goni’s Aegean Datahaven is a speculative project to create a series of repositories for personal and other data across the islands of the Aegean sea. View Works

The Aegean archipelago, which some call simply the Archipelago, part of the Mediterranean sea in the presently sidelined European South, is composed of a large number of bigger and smaller islands distributed unevenly in the water between Greece and Turkey; between Europe and Asia. Due to this geographical particularity and subsequent cultural diversity, the Archipelago has been of crucial importance for many centuries as the stage of major tensions and urgencies: military and political conflicts, population movements, tourist exploitation, financial crises and climate change. The most recent of those urgencies is last years’ refugee crisis with thousands of people crossing the sea seeking a safer future 1.

The islands of the Aegean, despite their heterogeneity, share common geographical, environmental, social and developmental traits. In the face of the equally shared harsh and erratic regional conditions, the area has since antiquity been densely interconnected through networks that created various topologies and continue to challenge or ignore established and contemporary forms of sovereignty, identity, geography and power 2.

The strength needed to live on the sea surrounded by the sea, a characteristic rarely realized by the seasonal traveler to the islands, is decisive in a number of ways. Among them one should underline the need to be self sufficient and at the same time to cooperate and to maintain networks. Markos Zagoraios is the κλειδοκράτορας (keyholder) of the Chora on Sikinos island: he holds the keys of all houses in the Chora and takes care of them when their residents are away, nurturing a network of trust on the island. According to him, cooperation and networks are the way people on the islands of the Archipelago have managed to survive through the centuries.

You had to be self sufficient and provident, because you are disconnected and no one would come and provide help. [..] You had to take care of the community, learn to live together and to cooperate, because everything had to be done in a collaborative way. This is how people managed to survive in the Cyclades from the antiquity until the arrival of electricity.

Markos Zagoraios, Κλειδοκράτορας/ keyholder of the Chora in Sikinos.
From an interview with Margarita Pournara, Kathimerini 6th of August 2017 (printed edition)

Thus the people of the community on an island are linked with each other forming the first level of a network: each community is self organized and at the same time remains connected with other communities in the Archipelago, which in turn maintain links with other island groups in the broader Mediterranean sea. All communities in each one of these three levels of connection share the kind of participation that fuels the distributed networks.

In a sense every island is actually a fractal of broader Mediterranean networks, that extent from small and local ones between two or more islands to the entire Archipelago, and to the entire Mediterranean. The content that is exchanged between the nodes can vary greatly depending on periods, epochs, seasons and sociopolitical conditions. This is what Fernard Braudel, the historian whose writings provide a thorough insight into the Mediterranean sea, described: the Mediterranean is an ‘exchange’, and no port can be studied without the implication of at least another port ‘speaking’ to it from somewhere else. The terms of the ‘conversation’ are variable: they may include the movement of goods and people, of ideas and armies, of cults and languages. Braudel speaks of the lines crisscrossing the Mediterranean in terms of réseaux, or ‘networks’ 3.
The islands surrounded by the sea, although being self contained and self sufficient, need the connections in order to survive. The networks overcome the notions of borders and frontiers linking the islands according to the needs that the insularity dictates.

The practice of connectivity and the concept of networks as observed by historians in the Aegean Archipelago and in the whole Mediterranean region converge with the models of connectivity conditioned by the extensive use of the Internet, the Cloud and the infrastructure supporting them. These multiple forms of networks keep on affecting the values, the hierarchies of centers and the peripheries, proposing or bringing into being new topologies and geographies 4.

If memory is defined simply as information storage (a definition open to serious objections), then we find memories all over nature. They float like islands within the general stream toward entropy, islands that preserve information for a time before they dissolve 5.

The islands are at the same time incarnations and repositories of memory. Carved by the sea water and the wind they are themselves bits of memory and simultaneously containers of memory. The memory as information is stored and encoded on the island and in order to revive it one should return to the island, to live on it. Through the repetitive contact with the sea the notion of time becomes relevant and the past revives itself:

The best witness to the Mediterranean’s age-old past is the sea itself. This has to be said and said again, and the sea has to be seen and seen again. Simply looking at the Mediterranean cannot of course explain everything about a complicated past created by human agents, with varying doses of calculation, caprice and misadventure. But this is a sea that patiently recreates for us scenes from the past, breathing new life into them, locating them under a sky and in a landscape that we can see with our own eyes, a landscape and a sky like those of long ago. A moment’s concentration or daydreaming, and that past comes back to life 6. 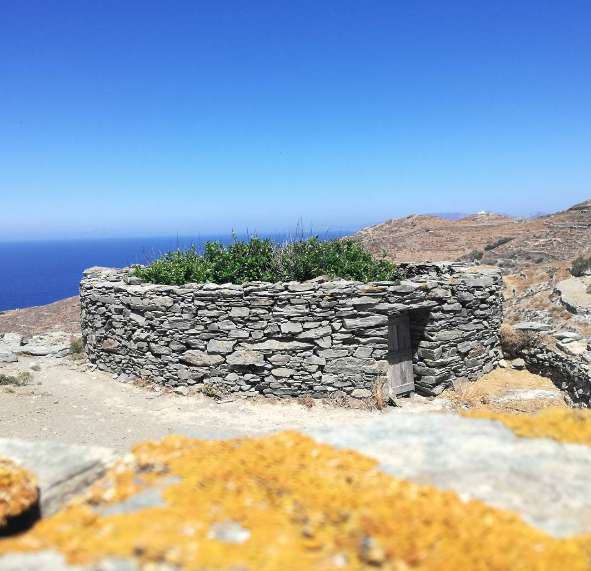 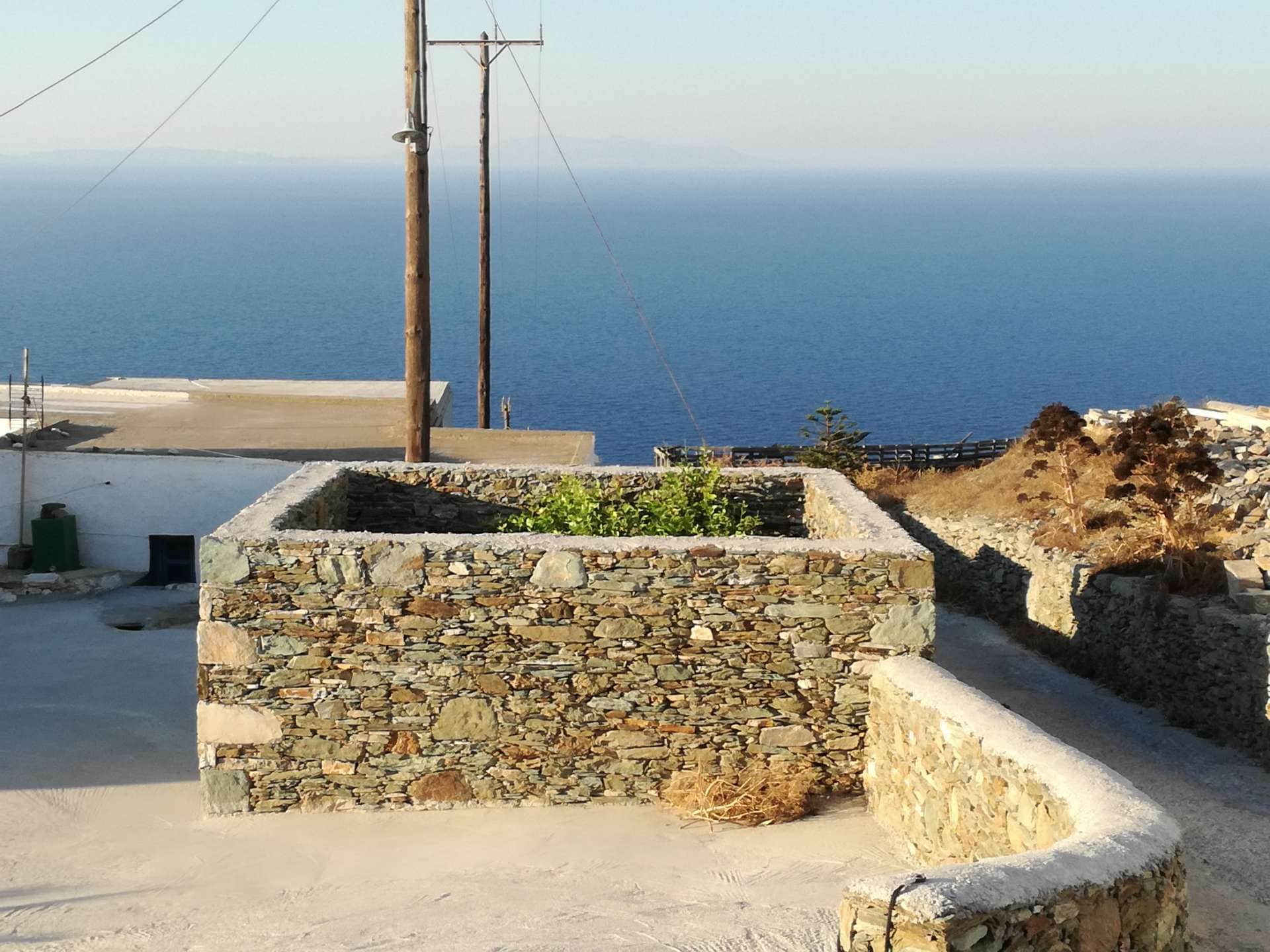 Part of these landscapes, villages clinging to hilltops high above, περιβόλια ή λεμονόσπιτα (lemonhouses), σύρματα (lodges for the boats), περιστεριώνες (dovecotes), fortified settlements, κύφες (kifes), ξερολιθιές (dry stone walls) are few of the many examples of traditional constructions on the Aegean islands. All these constructions entangled with the natural landscape reveal the power, the will and the urge to survive against all odds, to live in and with the natural conditions. Markos Zagoraios, the κλειδοκράτορας of Sikinos, shares his experience about the toughest of these constructions, the dry stone walls that articulate the landscape and make the earth suitable for cultivation by stopping soil erosion.

The toughest thing is the dry stone wall construction. [..] In order to survive one should get along well with the nature. To know the stones, the woods, the the soil, the herbs, the seasons, the sea, the animals, the weather, the wind, the fire.
Markos Zagoraios, Κλειδοκράτορας/ keyholder of the Chora in Sikinos.
From an interview with Margarita Pournara, Kathimerini 6th of August 2017 (printed edition). 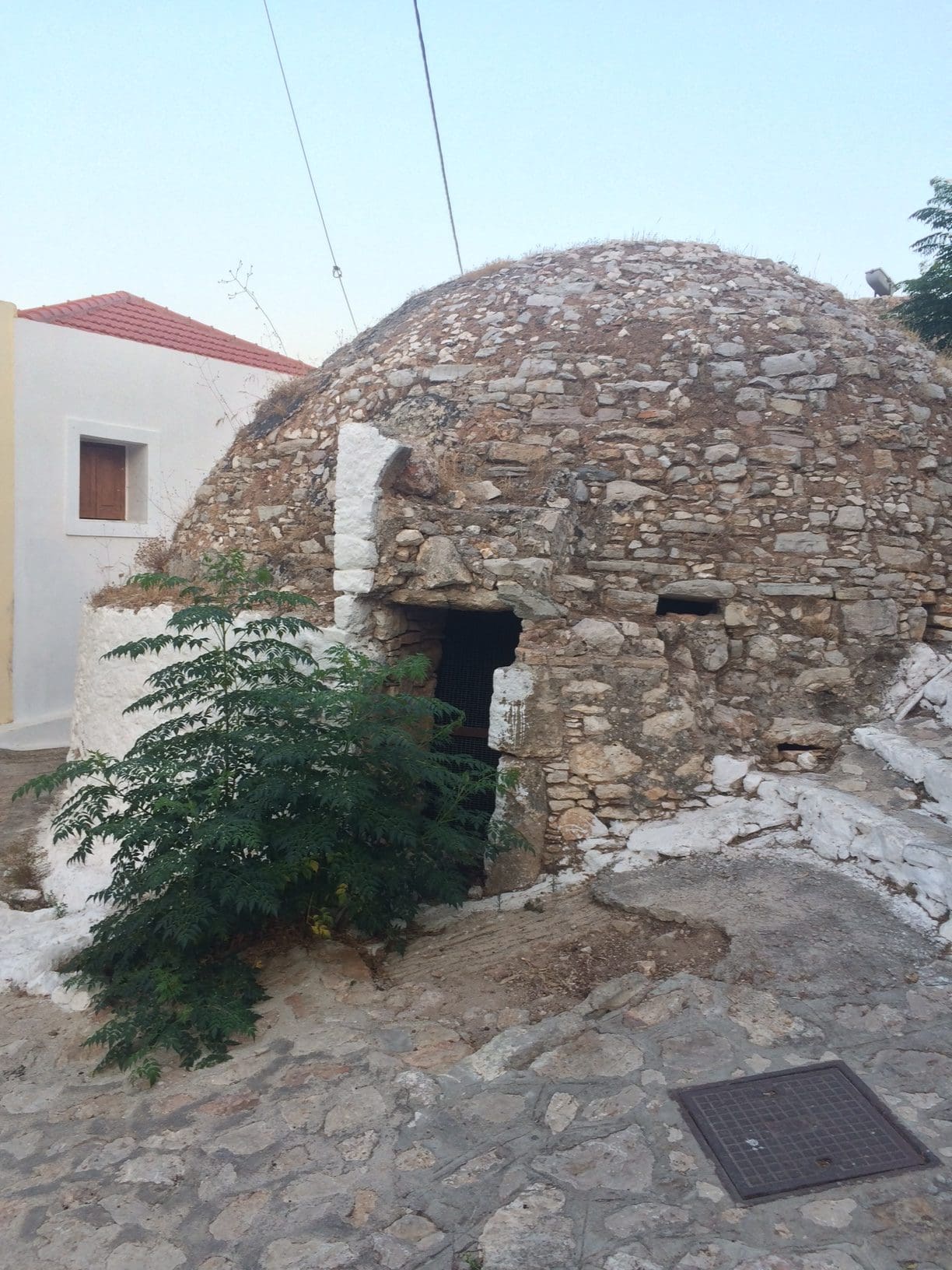 Fig. 3 Κύφη (kifi), round built construction where the shepherds used to stay during spring and summer while moving with their herds. Halki, 2017, © Kyriaki Goni 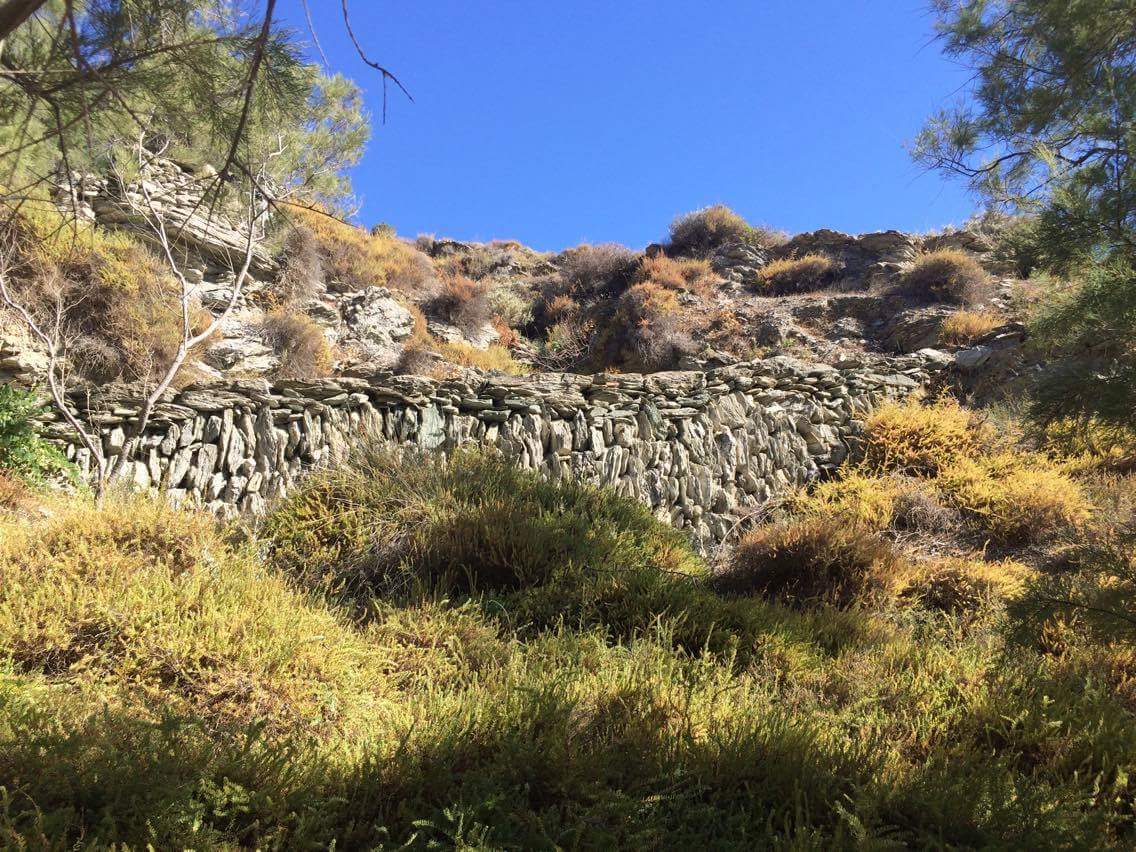 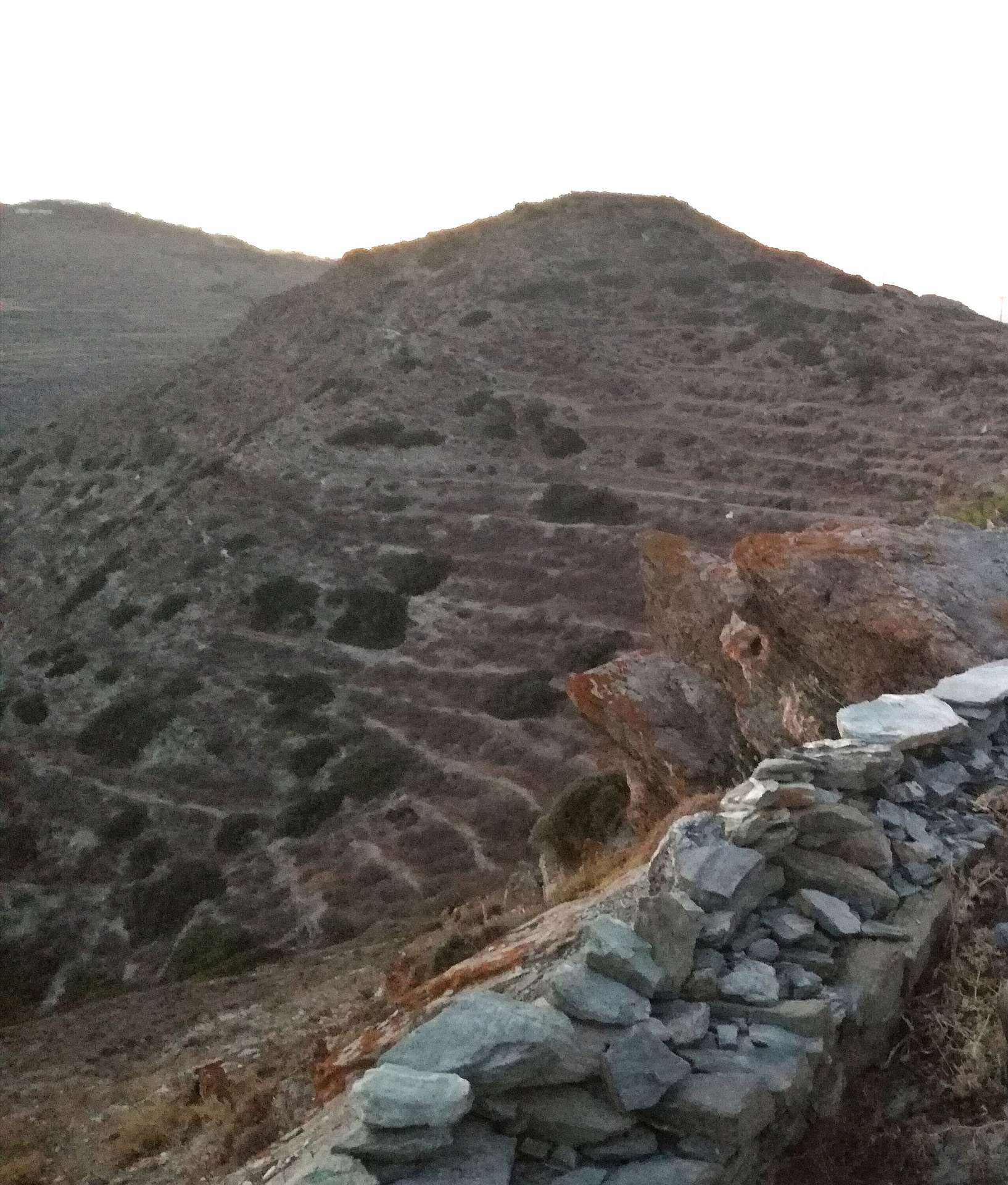 This demonstrated craftsmanship to protect and safeguard the community and the commons against the hardest conditions, being either the weather or the extreme isolation, justifies the islanders as the most suitable safeguards of any form of memory, as the most skilled builders of memory havens or datahavens.

In this new era the Archipelago poses the urgency of reenacting myths and redefining traditional craftsmanship, dedication and cooperation in order to maintain and to create new connections and webs of trust. The Archipelago is the most suitable territory for reactivating the networks and the connections in order to preserve the most precious piece of memory and information. Thus it is here, on the Aegean archipelago, that we propose the creation of the Aegean Datahaven, returning the lessons of the Internet to the ancient networks of trust and cooperation which preceded them.

This essay was written to accompany The Aegean Datahaven_A cooperative platform in the Archipelago, an installation that includes a series of drawings and a website, commissioned for the exhibition Tomorrows, in May 2017, in Athens, Greece, curated by Panos and Daphne Dragonas.

BIO
Kyriaki Goni is a visual artist working across media, combining an artistic practise with research in Artificial Intelligence, surveillance, oblivion, politics, memory and personal data, both within digital spaces and in their relations to physical world. Goni received a BA in Visual Arts and an MA in Digital Arts from the Athens School of Fine Arts and completed graduate studies on Social Anthropology at Panteion University of Social and Political Sciences in Athens, Greece, and postgraduate studies on Visual Anthropology at Leiden University in the Netherlands. She founded the design and research studio Visual Cortex that uses computational media to create bespoke interactive installations and projections that augment live performances and spaces. Her work can be found at http://kyriakigoni.com/.

1 Further statistical information about the refugee crisis on https://data2.unhcr.org/en/situations/mediterranean.
2 Despite the prevailing discourse on the strained relations between Greece and Turkey, people on the islands and the coast maintain tight informal connections by exchanging services and supplies.
3 For an extended view on the broader networks in the Mediterranean sea: Malkin, I., Constantakopoulou, C., & Panagopoulou, K. (2013). Greek and Roman Networks in the Mediterranean. Taylor and Francis.
4 ibid.
5 Vilem Flusser ‘On Memory’. LEONARDO, Vol. 23, No. 4, pp. 397-399, 1990
6 Braudel, F., Ayala, R. D., Braudel, P., & Reynolds, S. (2002). Memory and the Mediterranean. New York, NY: Vintage Books.