The conclusion of Liquid Architecture 2014′s Melbourne program is the unique spectacle of Toronto-based artist Christof Migone’s participatory composition Hit Parade, set to take place in the Great Hall on Sunday 28th September. The score calls for 50 participants lying face down on the ground to pound a microphone into the floor 1,000 times. Each person’s action is amplified. Each person chooses their own rhythm and intensity. The piece ends when the 50th person makes their 1000th hit (That’s 50,000 beats for those counting).

We invited Christof to tell us a little about Hit Parade and the ideas behind it. 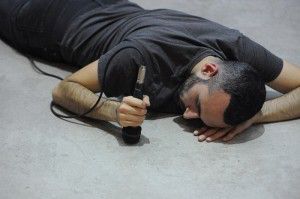 The microphone figures large in radio, it is the entry point by which the voice of the host starts its route towards the ear of the listener. Radio may seem like its main role is to communicate, but it can also miscommunicate. These moments of failure can be detrimental to the message but are also opportunities for content that is less coherent, less packaged, less bent on message. For me exploring the fault lines in the communicative act entails finding ways to use the microphone to amplify the mouth instead of the voice. That brought to the fore a somatic presence; the saliva, the tongue, the teeth gnashing and squishing around the microphone.

I thought up Hit Parade as a way to extend and expand the idea of bashing a microphone. This idea also intersected with another thread in some past work (like Crackers) to sound a city through its citizenry, and in unexpected or absurdist ways. For Crackers it was about recording people cracking their bones, for Hit Parade it’s about doing a simple gesture repeatedly and collectively. A proto-protest of sorts, a raw, brute, mute act of refusal or resistance. A search for the beach that lies underneath the concrete (Sous les pavés, la plage – Situationist slogan found on the walls of Paris in May ’68). Trying to get to the beach by any means necessary (the beach is not the quest per se, it’s the breaking of the concrete). 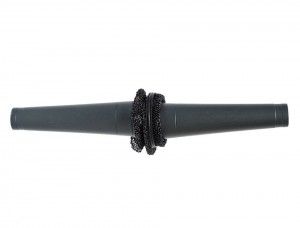 At the same time, the violence of the act is not the main focus for me, rather it’s the base rhythm, the unskilled labor, the lack of control I have over the piece once it starts, the range of reactions by both performers and audience. The physical manifestation of the act on the microphone interests me, the microphone is no longer pristine, it doesn’t stay idle and merely capture the sound, it actively becomes part of the action.

Members of the public are invited to participate in Hit Parade by registering their interest via [email protected] with “Hit Parade” in the subject.