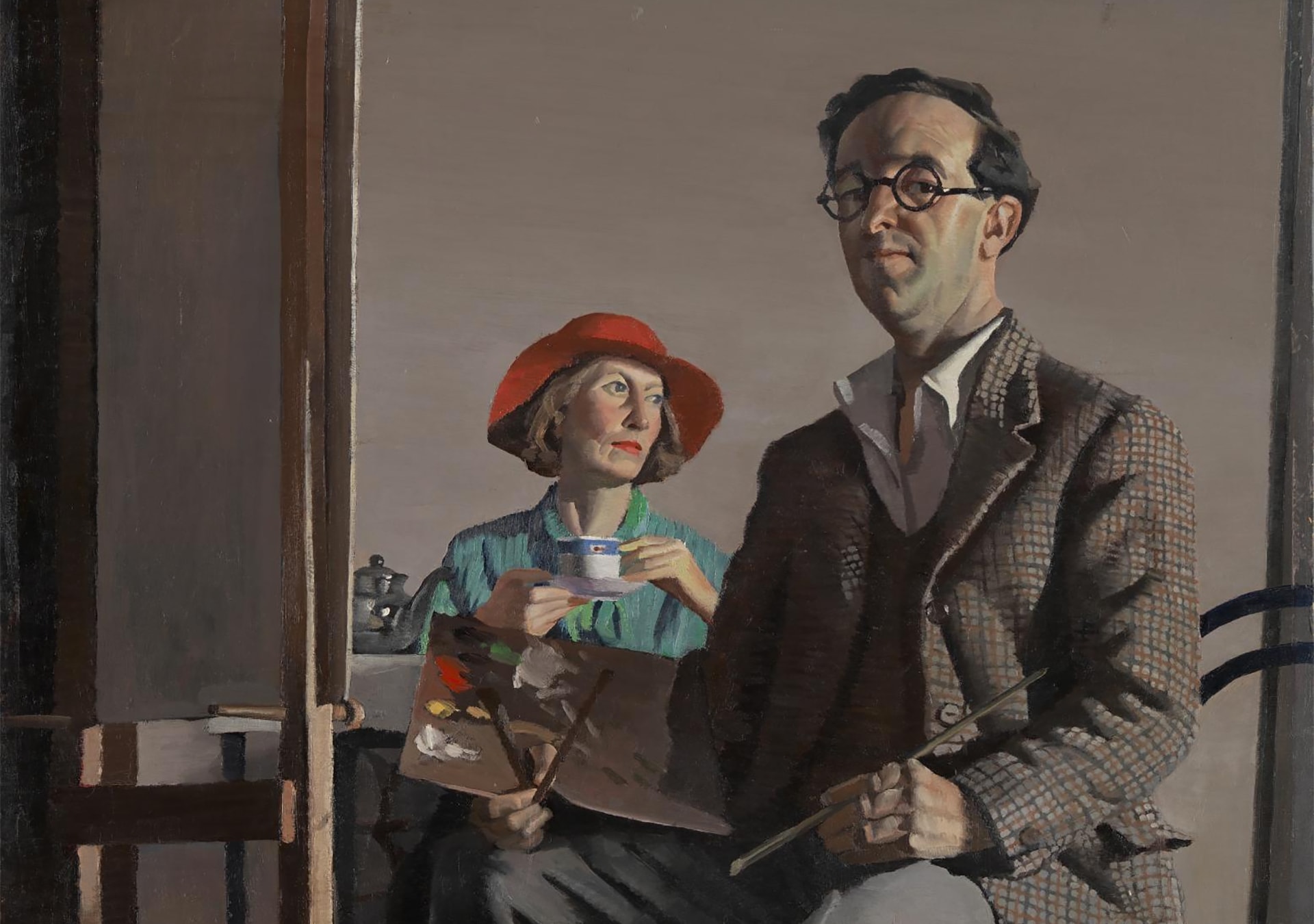 The Sydney realist Herbert Badham was an insightful and wry observer of Australian life in the 1930s and 1940s. He captured the customs, attitudes and fashions of his time in his detailed depictions of domestic interiors, beaches, streetscapes, bars and public transport, frequently incorporating the likeness of himself and his family members. Paint and morning tea (1937) is a self-portrait with a second figure in the background assumed to be the artist’s wife Enid. It encapsulates Badham’s cool irony; whereby the expectation of serious introspection is playfully subverted by the trivial act of sipping tea.

Paint and morning tea was painted on a sheet of cardboard, and bears a paper label on the reverse detailing the title and price of 25 guineas. During a routine examination of the painting, an underlying label was spotted peeking out from beneath. Although only a hint of the label text shows through, it can be successfully deciphered using an infrared camera. Remarkably, it relates to a previously unknown painting titled The frock shop, also priced at 25 guineas. This immediately raised the suspicion that there might be another painting underneath Paint and morning tea. Image of paper label on reverse of painting, adhered over another earlier label

One of the most effective methods of analysis for detecting underlying compositions or compositional changes is X-radiography. As X-rays pass through paintings, different materials attenuate or block their pathway to varying degrees, depending on the chemical composition of the materials and their thickness. This pattern of attenuation and transmission can be captured as an image on film. The X-radiograph of Herbert Badham’s Paint and morning tea was shot using a series of four plates of film, which were then scanned and digitally assembled.

X-radiographs capture all layers simultaneously, from the painting support to final paint layer, which makes them complex documents to interpret. Nevertheless, the X-radiograph reveals, in astonishing detail, a second unrelated painting beneath Paint and morning tea. This appears to depict a busy shopping street featuring a shop window displaying women’s apparel, consistent with the title The frock shop. Remarkably, the X-ray also shows an underlying artist inscription in the bottom right corner. This enables The frock shop to be firmly dated to 1935, two years prior to Paint and morning tea. Earlier signature and date relating to The frock shop, discovered in the bottom right corner of the X-ray The panoramic shop window to the right appears to contain mannequins dressed in women’s clothing, and a display of gloves at the front. Several figures can be seen strolling along the street and peering into the shop window. The two distant figures in the top left corner are depicted as silhouettes, possibly to indicate that they have passed into a covered area. The close-up figure to the far left, staring directly at the viewer, has facial features reminiscent of the female figure in another painting by Badham titled Travellers (1933). The figure in Travellers has been identified as the artist’s sister Nina.i Detail of X-radiograph showing several figures, including a female figure on the left facing the viewer

Although the exact location is unknown, The frock shop may well be based on a specific shop and street in Sydney. Panoramic shop windows with glamorous displays, designed to entice a new generation of socially mobile and financially independent female consumers, were a feature of many fashion and department stores. One possible candidate is Darrods Frock Shop at 110 Market Street, which incorporated a modern panoramic window display positioned to the right of a laneway leading into an arcade.ii Darrods held regular sales in the 1930s, which were advertised in the Sydney newspapers.

The frock shop reflects Badham’s mastery of drawing, and his skill in using the principles of perspective to establish an unexpected viewpoint and create a compelling sense of spatial recession. It is typical of his snapshot-like approach, whereby elements are casually cropped at the edges. Meanwhile objects outside the picture plane are cleverly integrated using the device of the reflecting shop window. For instance, the series of smaller windows that appear inside the shop window are in fact the reflection of another building, probably located across the street.

Badham was also an accomplished writer who went on to author two books on Australian art. The frock shop illustrates his highly idiosyncratic way of combining words and images to communicate a complex and layered narrative. Some of the more prominent verbal cues include the ‘SALE’ and ‘Deposits taken’ signs in the shop window. When signage is reflected in the shop window, it is inscribed in reverse. For instance, on the door lintel of the building reflected in the shop window, it is possible to just make out the word ‘hotel’ in reverse, which provides another possible clue to the location.

The frock shop is ostensibly a prosperous and carefree scene that reveals little of the uncertainty and hardship that characterised the 1930s. In 1935 the Sydney media was reporting on Mussolini’s invasion of Abyssinia, Nazi military parades and anti-Semitic measures in Germany, among other ominous portents of impending war. Only a few years had passed since the peak of the Great Depression, which caused mass unemployment, widespread poverty and homelessness. While Badham’s depiction may reflect a mood of renewed optimism inspired by the recovering economy, there are hints that a more nuanced and ambiguous narrative is playing out.

The newspaper or magazine flipped open in the foreground imparts a sense of mystery or foreboding, as if something unexpected is happening or is about to happen. Badham’s Breakfast piece featuring the artist’s wife Enid, also incorporates a casually placed newspaper at the edge of the frame. This contains a verbal reference to Mussolini’s invasion of Abyssinia, introducing a jarring note into an otherwise peaceful domestic scene. iii Although the fine detail of the newspaper is not visible in the X-ray of The frock shop, it may well have contained words or images referencing contemporary events. The phrase ‘a revelation’ arched across the centre right of the composition is equally enigmatic. It appears to relate to a sign in the shop window, possibly advertising the Revelation Suitcase Co. London, whose high-end expandable suitcases and ladies ‘Rev-robe’ cases for dresses were popular in Sydney at the time. Given Badham’s interest in verbal cues as an aid to storytelling, he may also be alluding to a parallel action or event taking place in the narrative, involving the unveiling of surprising information or facts.

Like Badham’s Travellers, The frock shop incorporates an actual suitcase, which can be seen sitting on the ground in front of the shop window. In addition to creating suspense and intrigue, the motif of the suitcase would have been loaded with connotations for contemporary viewers. For the relatively well-off, it evoked an exciting new era of travel and adventure. For those displaced from their homes by the economic crisis, struggling migrants and Jewish refugees it could symbolise dispossession, alienation and despair; a reminder of the fragility and transience of life. The frock shop appears to be a layered and nuanced rendering of Australian life, which would have provided a vivid insight into a specific moment in time. Why then did Badham make the remarkable decision to paint over and recycle it? Did he feel that the perspective or compositional arrangement was unsuccessful? Did it attract negative criticism? Was he unhappy with the narrative content? While the motivations of the artist may always remain a mystery, the X-ray provides a tantalising glimpse of an important painting that would otherwise be lost to Australian art history.

Raye Collins is Conservator of Paintings, National Gallery of Victoria