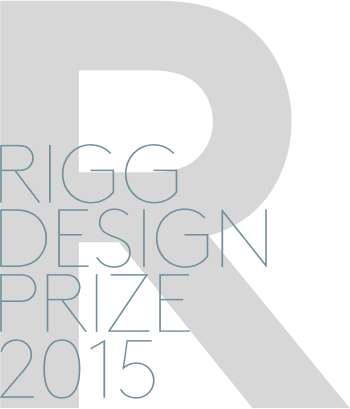 Formerly the Cicely & Colin Rigg Contemporary Design Award, the invitational award was established in 1994 to support contemporary craft and design practice in Victoria. In 2015, this prestigious award begins a new chapter by including designers from around Australia.

International contemporary designers Gijs Bakker (The Netherlands) and Wava Carpenter (USA), judged the Rigg Design Prize 2015 and awarded the accolade to Adam Goodrum for his work Unfolding. Adam will receive the $30,000 cash prize. The judges commented ‘Adam’s work proves that design has the potential for the unexpected and the new. Unfolding is very exciting, pushing the boundaries of what design can be with its dreamy, hazy and poetic atmosphere. We hope that the public will be as surprised and delighted by Adam’s work as we were.’

Establishing a picture of contemporary Australian design that is independent, original, and expressive of contemporary issues and values, the Rigg Design Prize 2015 exhibition features object and furniture design that ranges from the overtly functional to the highly conceptual.

The Rigg Design Prize is generously supported by the Cicely and Colin Rigg Bequest, managed by Equity Trustees.

Adam Goodrum (b. 1972, Australia) is a Sydney-based designer working on innovative, mass-produced products, design commissions, and limited edition and one-off furniture. Graduating from the industrial design program at the University of Technology, Sydney, in 1993, Goodrum was selected as the Sydney Morning Herald Young Designer of the Year in 1997, and listed in Bulletin magazine’s Smart 100 Australians in 2007.

Combining self-initiated projects with an impressive list of commissions for Australian and European clients, Goodrum has worked on products and furniture for design manufacturers, including Cappellini (Italy), Norman Copenhagen (Denmark), Veuve Clicquot (France), Tait (Australia), Cult (Australia), One/third (Australia) and Dessein (Australia). Goodrum’s Stitch chair for the Italian design manufacturer Cappellini was selected as one of the best designs of 2008 by the Design Museum, London.

Goodrum is a founding member of the Australian limited-edition design brand Broached Commissions, and lectures in the industrial design program at the University of Technology, Sydney.

Brodie Neill (b. 1979, Australia) is a designer based in London, UK. Neill graduated from the University of Tasmania, receiving a Bachelor of Furniture Design in 2002, before completing postgraduate studies at the Rhode Island School of Design, USA, in 2004. Neill entered the international design scene at Milan’s Salone del Mobile in 2005; later that year, he established a studio in London's East End. His prolific design studio produces a variety of designs, both large and small, from production furniture and lighting for international brands such as Kundalini (Italy) and Riva 1920 (Italy) to one-off projects for global brands such as Swarovski and Alexander McQueen. Commissioned to produce collectible limited-edition designs for galleries and private collectors around the world, Neill had one of his designs, @ Chair, included in Time magazine’s list of most influential designs of 2008. In recent years, Neill’s commissions have extended to design projects for public spaces including Portal, an 8-metre-high bronze loop-cum-seat for the Hobart waterfront.

In 2013, Neill founded the furniture brand Made in Ratio with the aim of designing, producing and marketing his own furniture and objects. Utilising digital design processes in collaboration with Europe’s best craftspeople, Neill has launched three Made in Ratio collections, across four continents.

Daniel Emma is the Adelaide-based design studio founded by partners Daniel To (b. 1984, Australia) and Emma Aiston (b. 1985, Australia) in 2008. Graduating from the industrial design program at the University of South Australia in 2007, To and Aiston have established a creative collaborative practice designing furniture, objects and homewares for exhibitions, and limited and mass production. Combining self-initiated projects with client commissions, Daniel Emma looks to create simple and fun objects, drawing influence and insight from Australian culture.

Aiston was the recipient of the SOYA Qantas Prize and awarded an internship at Marc Newson Ltd in Paris, allowing her to gain valuable experience between 2007 and 2009. Following this, To and Aiston worked in the London design studios of Thorsten Van Elten and Committee.

Kate Rohde (b. 1980, Australia) graduated with a Bachelor of Fine Art from Victorian College of the Arts with Honours in 2001. Garnering attention for her highly ornate and extravagant style, Rohde has exhibited her sculptures, installations, jewellery and design projects extensively in solo and group shows in Australia and internationally since 2002. Her art and design work has been featured in the notable exhibitions: Handle with Care: Adelaide Biennial of Australian Art, Art Gallery of South Australia (2008) and Flourish, TarraWarra Museum of Art, Melbourne (2008). In recent years, Rohde’s work has appeared in Airborn, McClelland Sculpture Park and Art Gallery, Victoria (2013) and the National Gallery of Victoria’s exhibitions Melbourne Now (2013) and Express Yourself (2014). The latter was an NGVforKIDS project by Sydney-based fashion designers Romance Was Born, with whom Rohde has collaborated on fashion accessories and textile prints since 2010.

A recipient of the Australian Council for the Arts Studio Residency at the Cité International des Arts, Paris in 2007, Rohde undertook a coveted Asialink residency at Tokyo Wonder Site the following year, returning to Japan in 2010 to present her solo exhibition Fantasma, hosted by the University of Tokyo’s Koishikawa Annex.

Khai Liew (b. 1952, Malaysia) arrived in Australia in 1971. He draws on his cultural heritage and his experience and knowledge as a specialist conservator to design and produce furniture informed by the old and the new, the regional and the international. Ultimately, his oeuvre stands as a highly personal and distinctive statement on beauty and utility. Liew’s decades of working as a conservator, consultant and valuer, championing and promoting Australian colonial furniture, has led him to curate many significant private and public furniture collections for both state and national art institutions. These have featured numerous examples of Australian pioneer vernacular furniture sourced and conserved by Liew.

The production of prototypes, limited editions and one-off furniture commissions takes place in Liew’s Adelaide studio and workshop. Since its formation in 1996, the eponymous practice has employed a small group of highly experienced artisans to produce works in collaboration with Liew.

Liew is Adjunct Professor, School of Art, Architecture and Design, University of South Australia and a Fellow of the Design Institute of Australia.

Korban/Flaubert is a design and production partnership between metalsmith Janos Korban (b. 1961, Australia) and architect Stephanie Flaubert (b. 1965, United Kingdom). They work across design and sculpture, delivering furniture, screens, installations, and public and private architectural commissions. Korban and Flaubert initiated Korban/Flaubert in 1993, during an extended period in Germany spent working on experimental lightweight architecture, exhibition design and metalwork. This led them to collaborate on both abstract and functional forms developed through experimentation and the manipulation of metal. Establishing the Sydney studio and metal workshop in 1995, their material-centred approach to design has evolved. Korban demonstrates significant expertise in metal and Flaubert’s model making is central to the conception and development of design objects and sculpture.

Established in 2000 by interior designer Russel Koskela (b. 1973, Australia) and law graduate Sasha Titchkosky (b. 1970, England), Koskela is a Sydney-based furniture and product design company and retail store. Designing and manufacturing in Australia for the commercial and retail sectors, Koskela has worked with leading Australian corporations, architects and design firms to furnish domestic, workplace and university interiors.

Koskela and Titchkosky believe that great design can be used to effect social change. They have been collaborating with Yolngu weavers from Elcho Island Arts on interior and lighting products since 2009. The ongoing collaboration aims to provide Indigenous weavers with an additional stream of income from their work, and develop new and compelling contemporary design products for the interiors market. In 2010, the collaboration resulted in the Yuta Badayala (meaning ‘in a new light’) , with the weavers contributing technical skills, material knowledge and artistic capabilities, and Koskela contributing design and marketing skills along with their significant experience in the interiors market.

‘Yolngu women have been weaving objects using fibre such as pandanus grass and bush string for many hundreds of years’, said Mavis Warrngilna Ganambarr (b. 1966, Matamata), a senior weaver from Elcho Island Arts.

In the old times, we made fibre objects for ceremony and for carrying and catching things. These days we still make these objects, but we can also make new things with these fibres. The lampshade project was an opportunity to try something new and show our artwork in a new light.