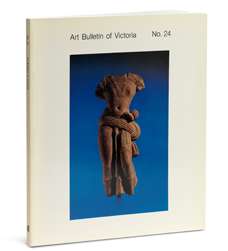 This issue of the Art Bulletin of Victoria 24 encompasses essays discussing works from a variety of areas across the NGV’s collection:

Richard Haese investigates ‘the lost Wimmera years of Sidney Nolan’ between 1942 and 1944, discussing the importance of the recent gift by Sir Sidney and Lady Nolan of twenty-five of these Wimmera paintings; Judith Ryan assesses the primitive sculpture of the ancient Nayarit, criticising the historians and archaeologists that deemed them ‘subhuman monstrosities’; John Guy presents an essay on early Indian sculpture and the significance of bodhisattvas as semi-divine beings; Colin A. Hope discusses two objects of importance in the Gallery’s collection of antiquities from Egypt: the Head of Queen Nefertiti and Figure of Ptah-Sokar-Osiris; and Geoffrey Edwards comments on the sculptor Sir Jacob Epstein and his possible influences while creating his Sunflower.

We are also pleased to include Judith O’Callaghan’s article on the Gallery’s recent acquisitions of Australian silver by artists Ragnar Hansen and Hendrik Forster, and Jennie Boddington’s essay on the portrayal of architecture in the photography of Dr John Murray and Captain Linnaeus Tripe in the mid-1800s.