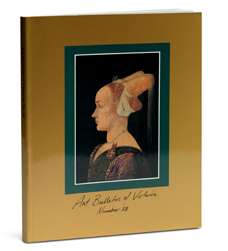 This issue of the Art Bulletin of Victoria 28 is dedicated to Ursula Hoff, whose work on the Bulletin transformed it from a six-page quarterly brochure into the journal it is today. This edition encompasses essays discussing works from a variety of areas of the NGV’s collection:

Margaret Manion analyses several illuminated manuscripts in the Gallery’s collection, explaining how the contents, ordering and decoration reflects the varied interests of their original owners and the specific purpose for which they were made; Patricia Simons compares the profile portraits of women in the Renaissance, how the style of portraits adapted to changing values and the ‘contradictory play between actuality and ideal, between virtue and immoral ostentation’; Andrew Topsfield discusses Udaipur paintings of the Raslila: religious dance dramas that originated and still flourish in the Braj country, around Mathura and Brindaban; Harley Preston presents an essay on the ‘most conscientiously craftsmanly and flamboyantly sumptuous of the British orientalists’, John Frederick Lewis, and in particular his versions of The harem; Nicholas Draffin studies the ‘enthusiastic amateur of the arts’ Eliezer Levi Montefiore, his art and family business in Melbourne 1853–71; and Margaret Plant discusses Australia’s quest for modernism in the first two to three decades of the twentieth century, stipulating the examples of Hans Heysen, David Davies and Frederick McCubbin.

We are also pleased to include John Brack’s comments on Balthus’s Nude with a cat and the ‘sacred eroticism’ of the artist, and also William S. Heckscher’s contemplations on the guidance of Erwin Panofsky at a time when Heckscher and Ursula Hoff were both engaged in graduate studies in the Department of Art History in Hamburg.