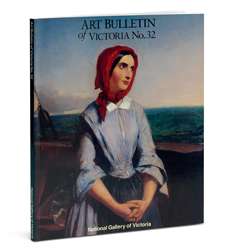 This edition of the Art Bulletin of Victoria 32 encompasses essays discussing works from a variety of areas of the NGV’s collection:

Pamela Gerrish Nunn discusses the social and political phenomenon of emigration from Britain in the mid-nineteenth century, and the profusion of painting and prints it inspired, namely Marshall Claxton’s An emigrant’s thoughts of home; Isobel Crombie presents an essay on the intriguing portrayal of Victorian Aborigines in Douglas T. Kilburn’s daguerreotype and the subsequent engravings derived from it; Alison Inglis and Cecilia O’Brien investigate the works of the Pre-Raphaelite artists of the mid-nineteenth century, focusing on William Holman Hunt and his versions of The Lady of Shallott from Tennyson’s poem; and Mark P. McDonald discusses the graphic context of Jusepe de Ribera’s The poet, ‘one of the most enigmatic, yet influential, etchings from the seventeenth-century’.

We are also pleased to include a fine technical examination of Paolo Veronese’s Nobleman between active and contemplative life by our very own painting conservator at the Gallery, John Payne.

Veronese and friends: a technical examination of Nobleman between active and contemplative life

‘The Breaking of the Web’: William Holman Hunt’s two early versions of The Lady of Shalott

The graphic context of Jusepe de Ribera’s The poet