Peter Tyndall is a well-respected, and rather funny, conceptual artist, who has developed a number of tropes that engage with recursive relationships between art, language and meaning. Language shapes what is possible to know; at the same time meaning shapes and changes language. Art often brings other kinds of knowing into being; at the same time we don’t always know what art means. Contemplating and discussing a painting attaches meaning to it, although it was never a blank canvas to begin with (well, unless it was…).

The notion of the ‘meta’ processes at work when we look, talk, write and make are central to Tyndall’s project, which began in earnest in the 1970s with his painting depicting the hanging system and frame of a blank painting. This is often referred to as ‘a painting of a painting’ but in fact it’s actually a painting of the apparatus that surrounds painting without a painting; it is a painting of a void around which we have constructed: something that frames, in order to produce meaning; and something that supports this frame, in order to believe in this meaning.

This form became a ‘logo’ which Tyndall employed in subsequent work; a ‘logo’ in the sense that is a featureless image that stands in for all of those mechanisms at play in art and their contemplation. Tyndall’s recurring use of the title detail: A Person Looks At A Work Of Art/ someone looks at something… LOGOS/ HA HA refers directly to this (its constant use since the 1970s reminding us that they are always at play, every time), with ‘logos’ referring to language and ‘ha ha’ to the fact that, well, you gotta laugh, don’t cha? Humour is essential, gain insight into ‘the void’ without that pressure valve and your head might explode: the search for meaning becomes too daunting, too scary. (‘If you’re really serious you should be laughing’ is a phrase the artist inscribed at the base of a work in 1974).

As part of his participation in Melbourne Now, Tyndall will be presenting his ongoing project of the past six years, his blog entitled bLOGOS/HAHA.

The blog continues Tyndall’s investigation into, and manipulations of, the histories, taxonomies and correlations that facilitate meaning ‘sticking’ to things; a rumination on images and words. A recent post on bLOGOS/HAHA is dedicated to Melbourne Now:

“We collected this gutter strip from the local Post Office today.
Behind the couple in the stamp, looking at their MELBOURNE NOW gallery guide, is an updated rendition of John Brack’s The Car, 1955” 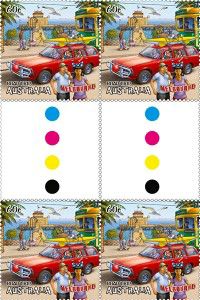 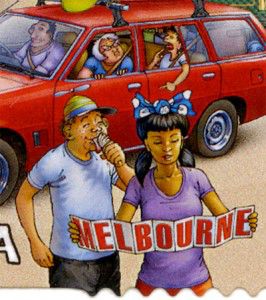