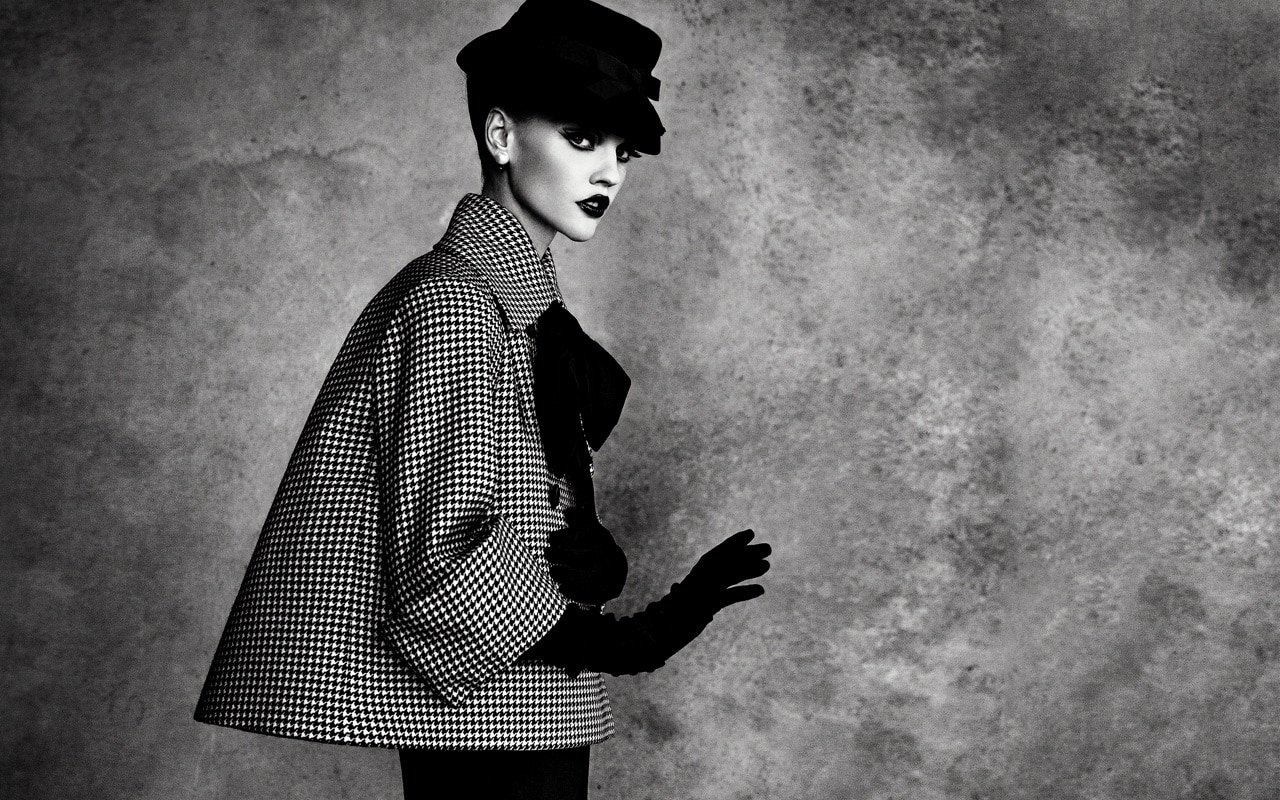 The House of Dior: Seventy Years of Haute Couture

Christian Dior was born into a comfortable middle-class family in 1905 in Granville, a seaside resort in north-western France. His great-great-grandfather established a company that produced fertiliser and chemical products, and this remained the family business during Dior’s childhood and early adult years. Dior was one of five children but was never destined to work in the business.

At the age of five his family relocated to Paris and the young Dior was exposed to a vast array of alternative career ideas.

Dior persuaded his parents to provide funds to help him establish an art gallery in partnership with friend Jacques Bonjean. His parents provided these funds on the proviso that the family name was not associated with the endeavour:

I joined forces with a friend Jacques Bonjean, to open a small gallery at the end of a fairly insalubrious cul-de-sac in Rue La Boétie. Our ambition was to exhibit the masters that we admired the most: Picasso, Braque, Matisse, Dufy, the painters we knew personally and already greatly respected: Christian Bérard, Salvador Dali, Max Jacob, the Bermann brothers, and others.

During his twenties grappled with a series of family misfortunes. Both his elder brother Raymond and his mother Madeleine died, and the family business was ruined in the wake of the stock exchange crash of 1929.

Through friend Jean Ozenne Dior was inspired to try his hand at fashion sketching as a means of earning some money. His sketches for hats were noted at the time as being particularly good. This marked the point at which Dior, now in his thirties, started to work in the fashion world, being employed at first as a fashion illustrator for couturiers, milliners and newspapers.

In 1938 Dior was hired as a design assistant for fashion house Robert Piguet, where he worked for a year until he was called up for war service.

After demobilisation Dior took a position as designer with Lucien Lelong, where he worked alongside another young fashion designer, Pierre Balmain. During the 1920s to 1940s it was one of the most successful houses operating in Paris, and as president of the Chambre Syndicale de la Haute Couture, Lelong played a critical role in protecting the French couture industry during the German occupation. Dior recalled:

‘Neither Balmain nor I will ever forget that in spite of wartime restrictions and the constant fear of closing, Lelong taught us our profession’.

A meeting in 1946 with the powerful textile industrialist Marcel Boussac signalled the next momentous development in Dior’s story. Boussac proposed Dior take on Phillippe et Gaston, a flagging couture house he owned. But Dior declined and instead made it known that he wished to establish his own couture house. Boussac agreed to fund the enterprise and in December Dior established his business at a grand mansion at 30 Avenue Montaigne.

The stage was set for the establishment of a new couture house for postwar Paris. Later Dior reflected:

I wanted a house in which every single thing would be new, from the ambience and staff down to the furniture and even address. All around us life was beginning anew: it was time for a new trend in fashion.

By the time the first collection presentation date was announced public anticipation was intense, and invitations to the event on 12 February 1947 were coveted and even sold on the black market.

The first collection comprised two lines – La Ligne Corolle (the Flower line) and En 8 (signifying the shape of the number 8) – and a total of ninety-five looks were shown.8 The presentation started with suits and day clothes, moved through cocktail dresses, short and long evening wear and gala dresses, and culminated with the wedding gown. New Look.

By 1948 Dior was the biggest name in fashion. With much excitement Australian Department store David Jones announced they would be exhibiting the first representative collection of original Dior fashions to be shown outside of Paris. The fifty-piece collection, of day, cocktail and eveningwear, would be shown in Australia for two weeks, ahead of New York and London.

Christian Dior is awarded the French Legion of Honor for his contribution to the fashion and textiles industry.

Dior negotiates an agreement with Sydney fashion label House of Youth for the reproduction of exclusive Christian Dior–New York models for the Australian market.

The working relationship with Dior began in January 1953 and lasted for ten years.

In recognition of his creative status, Vivier’s name was stamped into the insole alongside that of Dior. Roger Vivier was the only person to enjoy the privilege of being a Dior co-signatory in this way.

In August Christian Dior gives a lecture on “The Aesthetics of Fashion” at the Sorbonne amphitheater in Paris in front of 4,000 students. The Bar suit is presented as part of this lecture along with works from the autumn-winter 1955 collection. Restyled and worn by the model Renée is photographed by Willy Maywald on the banks of the Seine and the image becomes an icon.

Christian Dior appeared on the cover of Time magazine (4 March).

On 24 October Christian Dior dies of a heart attack at the age of 52 in Montecatini, Italy. Christian Dior Couture produces fifty per cent of all French haute couture exports.

When Dior dies plans to bring a second major couture parade out to Australia were already in place. Organised by David Jones and the Australian Women’s Weekly, the event still went ahead and in late November eighty-three outfits from Dior’s final collection, along with seven of Dior’s house mannequins arrived. Included in the selection were model garments titled Sydney, Melbourne, Canberra and Wattle – a sure sign that Dior cherished Australia as much as Australia cherished Dior.

Yves Saint Laurent’s first collection, spring–summer 1958, was a range of triangular silhouettes, later dubbed the Trapeze (Trapèze) line, and it was a popular success. Over the next three years, Saint Laurent produced six couture collections that forged a new direction for Dior.

Marc Bohan was the head designer for the House of Dior for twenty-nine years, during which time he presided over fifty-seven haute couture collections. Schooled at a number of Parisian couture houses, Bohan first joined Dior as designer for the London ready-to-wear line in 1958. In 1960 he replaced Yves Saint Laurent as creative director of Dior.

A major retrospective exhibition is held at the Museé des Arts Décoratifs to celebrate the fortieth anniversary of the House of Dior.

Dubbed the ‘architect of fashion’ by the international press due to his highly engineered aesthetic, Italian-born Gianfranco Ferré spent fifteen seasons at Christian Dior. Presenting a reserved first collection in 1989, Ferré soon introduced a lavish and sculptural design sensibility to Dior, reinterpreting the house’s codes with a modern tenor. He promoted a formidable version of femininity, evident in precisely tailored suiting and daywear, and highly dramatic evening gowns.

John Galliano held the post of creative director of Dior Couture for twenty-nine seasons, commencing on the fiftieth anniversary of the debut of the house in 1997. His appointment was a bold choice, compounded by the fact that he was the first British designer to head a major French fashion house in nearly 150 years. Dramatic and postmodern in his approach, but technically brilliant, Galliano showed that he had much in common creatively with Christian Dior. Dismissed from Dior amid controversy in 2011, Galliano’s tenure there is nevertheless seen as an exciting era of creative excess.

Belgian designer Raf Simons held the role of creative director at Dior from 2012 to 2015, presenting a total of seven couture collections during this period. Known for his minimalist and streetwise aesthetic, Simons’s debut collection for autumn–winter 2012 drew on Dior’s foundation years, notably the Bar coat in dialogue with contemporary sources such as Sterling Ruby’s paintings. The production of this collection became the subject of the 2014 documentary film, Dior and I, by Frédéric Tcheng.

Chuiri presented her first couture collection for the house in January 2017. Coinciding with the seventieth anniversary of the house, the presentation at Musée Rodin combined established house codes, such as the New Look, the flower and astrology, with a spirit of romantic youthfulness that was unapologetically feminine. Two major exhibitions celebrate the seventieth anniversary: The House of Dior: Seventy Years of Haute Couture (National Gallery of Victoria) and Christian Dior, Designer of Dreams (Museé des Arts Décoratifs).

The House of Dior was established in 1946, and its first haute couture collection was shown in 1947. It is now seventy years since Christian Dior presented his vision to reinvigorate the ailing postwar French fashion industry and created a couture house whose reach and relevance is still felt globally today. Founding the house at the age of forty-one, Christian Dior oversaw the growth, success and influence of the label during its first ten years, until his untimely death in 1957. He was highly influential in redefining the feminine postwar silhouette in the late 1940s to mid-1950s by introducing styles that featured rounded shoulders, exaggerated padded hips and full skirts made with an abundance of fabric. Dior was an extraordinary designer, entrepreneur and visionary who had a lasting impact on mid twentieth-century fashion and culture. Shaped by the constraints and opportunities of the tumultuous era in which he lived, Dior carved out a groundbreaking path in fashion and has become an inspiration to generations of designers including the six creative directors who have succeeded him at Dior.