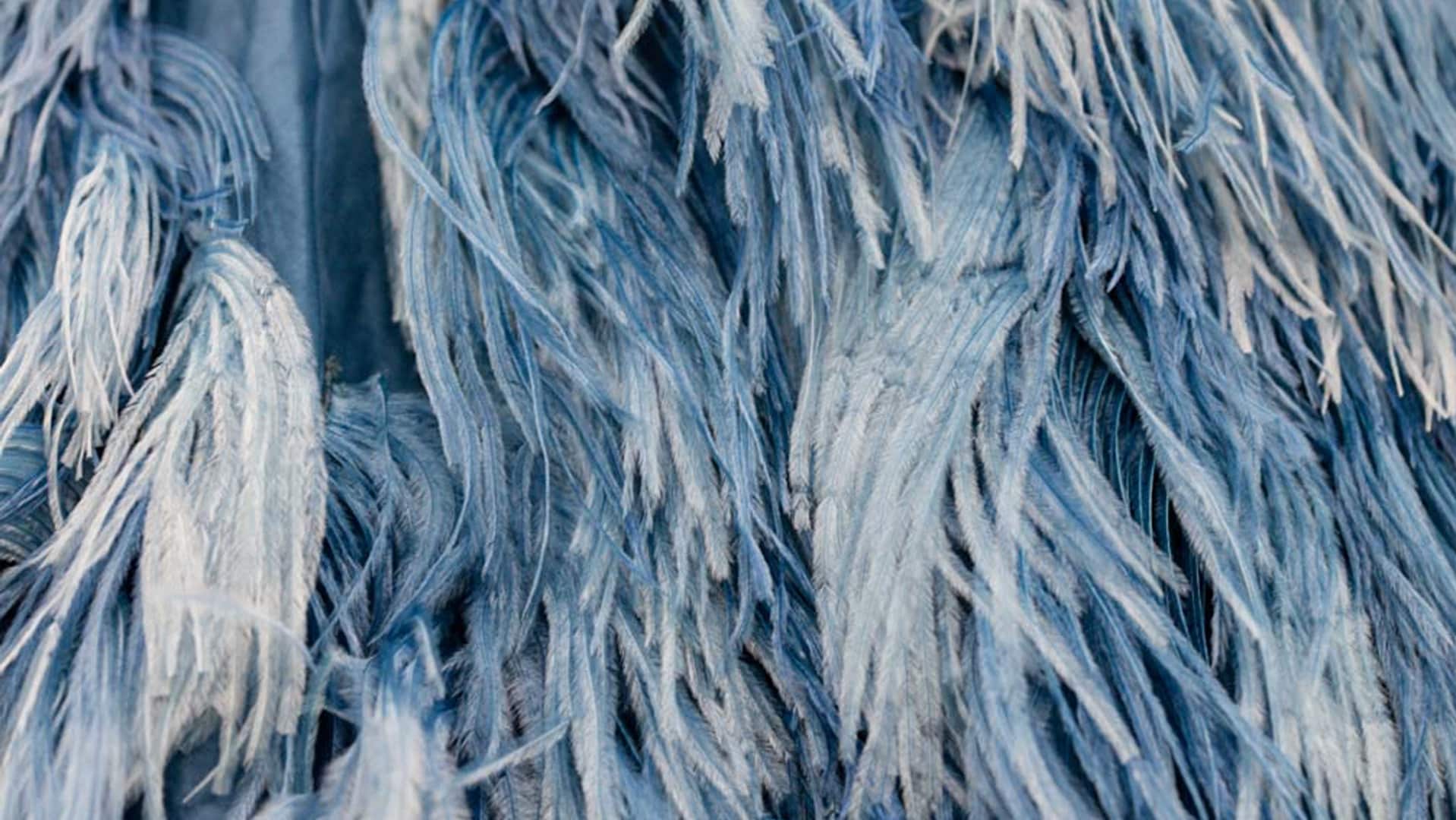 Danielle Whitfield, Curator, Fashion and Textiles, and Susan van Wyk, Senior Curator, Photography, share their perspectives of a dress that first found its way into the NGV Collection via a black and white Athol Shmith photograph. Some years later, serendipitously, they received a phone call about a certain feathered, blue, dress. The dress
During the 1950s, the tree-lined top end of Collins Street was considered Melbourne’s epicentre of style. Known as the ‘Paris end’, the precinct was home to a number of exclusive dressmaking salons, including La Petite, Le Louvre and Hall Ludlow, the millinery houses of Thomas Harrison and William Beale, and down the hill, the iconic Georges department store. Inspired by Parisian couture houses, the salons were opulently furnished and specialised in custom-made luxury and glamour for a fashionable and well-heeled clientele.

La Petite, founded by Neil and Pat Rogers in 1940, was located at 165 Collins Street, opposite Georges. An intimate salon, with dressmaking, tailoring and millinery workrooms, La Petite produced elegant day and evening wear for a world of social functions, galas and garden parties. Sophisticated glamour defined the tenor of the era, typified by a romantic silhouette of hand-span waists and voluminous skirts.

At La Petite, garments were all made to- measure from expensive imported fabrics and showed high standards of finish and control, with specialist embroidery and hand-beading a feature of the salon. Collections were presented in-house on mannequins to receptive audiences and reported on with regularity in the fashion pages of newspapers such as The Argus and The Age. A prominent designer and advocate for Australian talent, Rogers was quoted in the mid-1950s as saying her designs did not ‘simply follow fashion’s dictates from there (Paris) or from America’ and that the fabrics they purchased overseas were shown in Melbourne ahead of the overseas markets.

Even so, the cornflower blue Evening dress is far more extravagant than was typical for the label and is believed to have been made as a show piece for one of the salon’s window displays: the generous skirt is covered with delicate bands of hand-dyed and appliqued ostrich feathers and offset by a hand-beaded bodice decorated with a scrolling pattern of bugle beads, sequins and glittering diamantes. Deceptively light in appearance the dress conceals an armature of petticoat layers, boning and internal weighting and fastenings designed to maintain line and form.

The gown was hanging in the workrooms when Annette Klooger, star of The Annette Klooger Show and a well-known singer, walked in for one of her regular client fittings. Captivated by the gown’s grace and its theatrical qualities, Klooger ‘fell in love with it and tried it on’. The gown fit perfectly and she purchased the work to wear on stage, appearing, most memorably, in a live performance on The Graham Kennedy Show in 1960.

In 2006, a photograph of this dress by Athol Shmith was exhibited in the National Gallery of Victoria’s The Paris End exhibition. An arresting image of idealised beauty and high-end style that captured the ‘look’ of the era, the photograph gave little away about the work or its maker. So it was with great surprise that in 2012 the fashion and textiles department received a call from Annette Klooger’s cousin, to say that she had a dress in her possession that she believed was illustrated in an Athol Shmith photograph. Describing the work as a large feathered ball gown, it was immediately apparent which dress she was talking about and today we are lucky enough to have it in our collection.

The photograph
Athol Shmith was one of the most exciting and influential figures in Australian fashion photography. He began his career in photography in the early 1930s, and by 1939 had established a studio at 125 Collins Street, at the ‘Paris end’ of Collins Street. All the major fashion houses and boutiques used Shmith; the city’s debutantes, brides and society dames were photographed by him; and the stars of Melbourne’s thriving theatre and emerging film industry were often seen at the studio. Like the other photographers on Collins Street, Shmith made use of glass-fronted showcases at street level to show his work to the passing parade on the street. His was one of the most popular, regularly attracting a crowd of people eager to see his images of the latest fashions, celebrity studies and society portraits, all photographed in the glamorous studio above. Although highly regarded for his portrait photography, it is in the area of fashion photography that Shmith became most famous. He photographed fashion for Melbourne’s small exclusive boutiques including Le Louvre and La Petite, as well as for the major department stores Georges and Myer. Shmith’s flawlessly glamorous photographs were perfectly suited to promoting the ideals of feminine beauty and sophistication embodied by the city’s high end fashion boutiques. His skilfully created images of elegant excess were a largely unattainable but nonetheless attractive fantasy which was perfectly suited to the fashions of the day.

Shmith had established his reputation as a studio photographer, but, in the 1950s and 60s, he increasingly began to shoot his fashion photography on location. This was a liberating and invigorating experience for Shmith who wrote, ‘When I go on location, even if it’s just another person’s studio, I find new things; I discover new ways of showing models; and I feel better.’ Working this way enabled him to bring spontaneity to his work. In this photograph of the remarkable feather dress by La Petite, the informal setting of the garden is the perfect foil for the formality of the couture gown. Describing the day of the shoot Shmith said, ‘This photograph was taken in Melbourne’s Botanical Gardens and looks staged, but in fact the swan fortunately just appeared on the scene. The woman in the photograph is Australian model, Anne Chapman, who later became one of Norman Parkinson’s favourite models. I remember bundling her into the back of my car in this dress to take her to where we were shooting – it was a very tight fit.’ The enviable style and elegance of this gown is perfectly captured in Shmith’s black and white photograph – what he could not capture here was the stunning blue colour that is a highlight of this dress. In a variant version, held in the collection of the National Gallery of Australia, Shmith overcame this limitation by employing highly skilled hand colourists to replicate the gown in all its technicolour glory.

The treatment
Although this garment was lovingly cared for over the decades by Annette Taylor (nee Klooger), age nonetheless had rendered the silk taffeta and organza fabrics that make up the gown fragile, and some of the ornate sequin, bead and diamante bodice decoration had been lost. The real testament to the care given to this dress was the fact the feather decoration of the skirt, often targeted by hungry insects, was largely intact, with areas of wear limited to the hipline and hem.

The conservation treatment for this garment was considered from three perspectives. Initial intervention addressed the structural integrity of the bodice and skirt: integrating reproduction sequins and feathers to compensate for areas of loss; and creating the silhouette seen in the Athol Shmith photograph with a custom-made support underpinning. Once areas of structural weakness in the bodice were stabilised, conservation work turned to addressing the gown’s aesthetics. Wear to the feather decoration at the hips and hemline of the skirt was the most pressing issue to resolve in this respect, as areas of loss in these areas detracted from the full, airy nature of the skirt. Undyed ostrich wing feathers were sourced, and the painstaking task of dyeing the feathers to match the original feathers began. Using only 1 to 2 grams of feathers at a time, a series of dye tests were undertaken to determine the depth of shade and balance of dye colours required to replicate the many tones present in the original feather decoration. When the correct shade was attained, full feathers were dyed in preparation for use in the treatment.

Once dyed and dried using a hair dryer, the fluffy ostrich barbs were trimmed from the feather shafts (rachis) using a sharp scalpel. To retain the barbs in a manageable strip, it was imperative that a sliver of the rachis be retained. Using a base of cotton stranded embroidery thread, small sections of dyed and trimmed feather barbs were secured using an overcasting stitch that passed around the retained sliver of rachis and between individual barbs. The length of ‘feathered’ embroidery thread was then stitched onto the silk organza overskirt to replace lost feathers around the hip and hemline.

To compensate for losses in the sequin bodice decoration, thermoplastic polyester sheeting was shaped and formed to make replica sequins that were then toned with a combination of pearlescent watercolours and acrylic paints. These were then hand-stitched onto the bodice with fine silk thread.

The final phase of the conservation treatment called on the skills of Ellen Doyle, Textile Display Specialist. With a costuming background in dance, film and opera, Doyle’s skills are a crucial aspect of presenting historical costume for NGV displays. Using the Athol Shmith photograph of the evening dress, Doyle built a crinoline to which tiers of ruffles were stitched. When displayed beneath the feather skirt, this underpinning provides support to the skirt and creates a historically accurate silhouette.

Conserving costumes involves many challenges and requires an understanding of the composition, deterioration and interaction of a broad range of materials. Because it requires the perfect combination of science, technology and hand skills, combined with the ability to solve complex problems, this work is very rewarding. The greatest satisfaction, however, comes from achieving a treatment that, to the onlooker, is barely visible.

This was originally commissioned for and published in the March–April issue of NGV Magazine (formerly Gallery magazine).

Related exhibition
200 Years of Australian Fashion
Back to Essays