A fantastical conglomeration of shells, flowing marine forms and even a sea monster surrounds the portrait of Sir John Rous, 1st Baronet of Henham Hall, painted by Sir Peter Lely in 1660. The recently restored picture and its extraordinary frame are part of the new hang in the 17th century galleries, the first display of the work since its gifting by the Countess of Stradbroke through the Australian Government’s Cultural Gifts Program.

This type frame is often called a Sunderland frame, a British form of the auricular style. Auricular, meaning ‘of the ear’, includes organic cartilaginous and leathery elements, as depicted in the metalwork of the period. Incredibly, the sinuous forms of the frame are carved in wood, which has been gilded with gold leaf to give a luxurious surround to the picture.

Sir Peter Lely often framed his paintings in this manner, however, the relatively new appearance of the gilding with its elaborate engraved detail, and the presence of a 19th century framers label on the back of the frame, brought the dating of the frame into question. 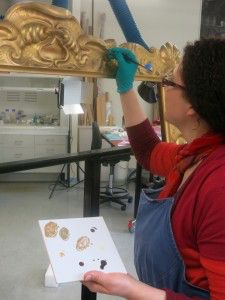 Further investigation showed that the pegged tenon joints used to construct the frame and the style of the overall carving, including its relatively flat profile, matches frames known to be from the 17th century in other collections. It’s most likely that the frame was made close to the time the picture was created, and then restored in the 19th century.

Prior to its display at the NGV, the frame required additional strips of wood to be added to the opening of the frame (sight edge), to ensure the painting would fit securely. The wood strips were gilded with grey bole, gold leaf and toning layers to match the gilding on the frame. Also, minor repairs were made to the surface of the frame in several areas.

The painting and its accompanying auricular frame are a rare addition to the collection, with few pictures from this period retaining their original frames. The frame is also an interesting example of how surface appearances can change over time.