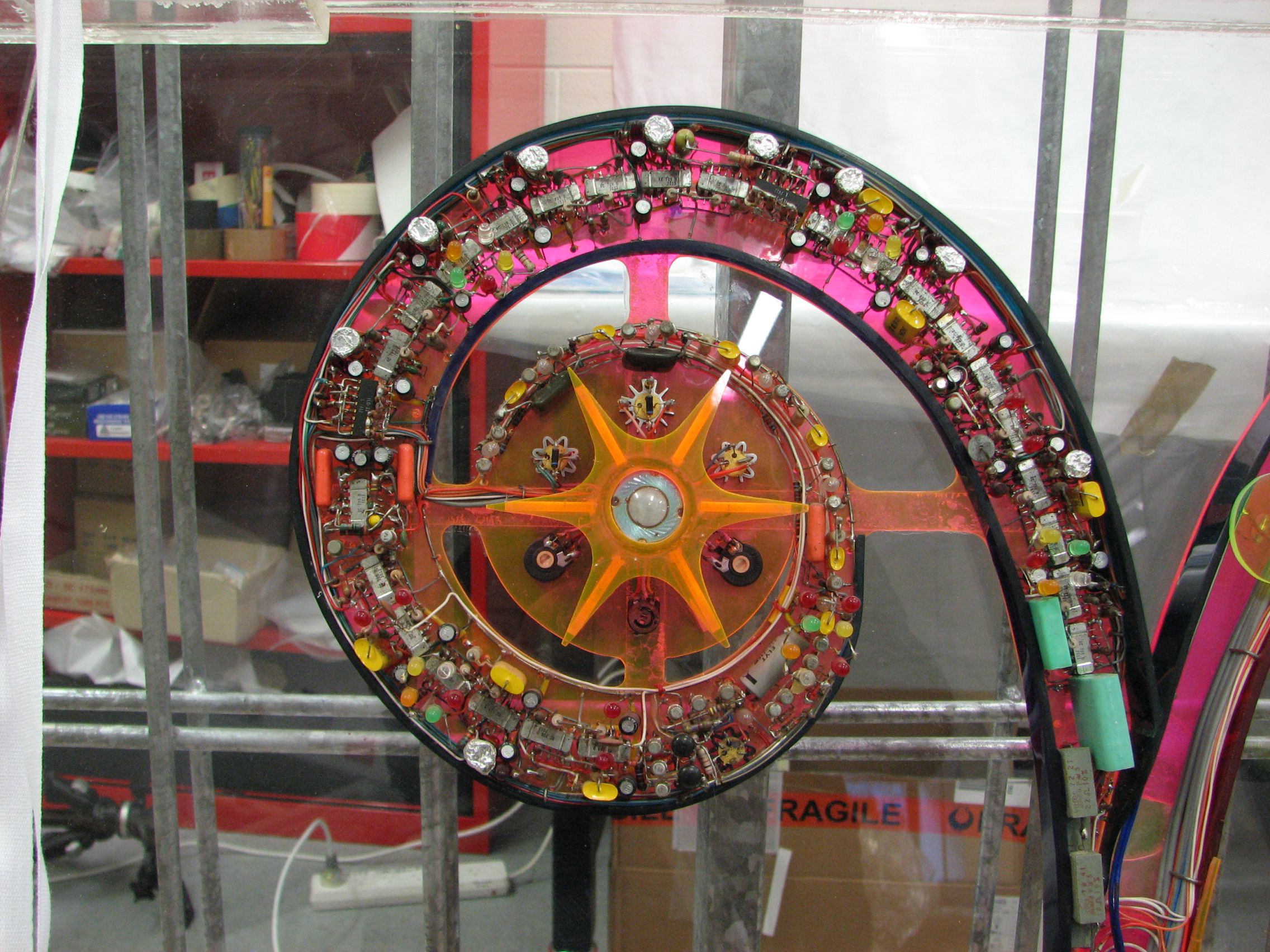 Q: How many Conservators does it take to replace a lightglobe?

A: Only 1 – but how many lightglobes does it take to replace an artwork?

Some time ago I posted a blog on Jack Meyer’s amazing kinetic light sculpture Industrial Revolution; this entry describes some of the practical and ethical issues faced in preparing the work for display.
Electronic circuitry used in artworks is typically hidden in a control box or behind a wall, but in Jack Meyer’s 70’s Zap machines the electronics were the medium. The componentry and wiring are all on show, mounted in clear faced acrylic light boxes, and the art is in the detail, the individual elements arranged in fine symmetrical patterns and sweeping curves that are a little bit paisley, a little bit fractal.

Nearly 40 years after the work was built, a conservator and an electronics engineer were brought to their knees by this artwork (seriously – we sat on the floor for 2 weeks testing each component and trying to identify or having a red-hot guess at what every element cluster was actually supposed to be doing).


In the course of this assessment, we identified 1 flashlight bulb, 2 glass fuses, 4 electrolytic capacitors, 1 tropical fish capacitor and 1 transistor that had failed * – and without all of which the key elements of the work (ie. lights and sound) would not function.

Technology based works have always presented collecting organisations with ethical dilemmas and forced compromises as hardware (and now increasingly software and operating systems) fail or become obsolete. But how many failed components should/can we replace in order to preserve the functionality of a kinetic/light/new media work before we dilute the artist’s hand?  Is it preferable to display a work that is 100% authentic materially, if that means it is less than 100% authentic aesthetically or experientially?

In this instance, with the visual appearance of the electronic elements such a significant factor to the aesthetic of the work, we decided to disconnect, but where possible leave the original failed parts in place, and solder the modern replacements into the circuit. New components that couldn’t be hidden were cosmetically painted to mimic the originals (tropical fish stripes included).  What will the custodian of the future think of this 2014 intervention? It may depend on when the storage crate is next opened and if the remaining capacitors have dried out, the bulbs have dimmed even further and how many soldered joints have  fractured.  What would Jack want?  I like to think he would want us to do whatever we could to maintain or simulate/emulate his original vision – and for me that means in all it’s lurid flashing glory.