Damien Wright is the founder of Wright Studios, a Melbourne-based furniture design and craft studio. Bringing together a timeworn set of hand-crafting skills with a feel for modernist design, Wright realises his designs through the painstaking use of indigenous Australian hardwood species that are not traditionally used to make furniture. Through extensive research and sensitive cross-cultural collaboration, Wright incorporates into his design philosophy a wealth of knowledge regarding Australian history, politics and land management practices.

Appearing in Melbourne Design Now on level 2 at NGV Australia, Brief by Damien Wright is a table of rare material provenance – such is its extraordinary nature, that Wright’s table is a design with direct ties to Australia’s pre-European history. Allow me to tell you why.

With four invisible side drawers belying a seamless exterior Brief is made from ancient red gum, a 10,000-15,000-year-old jet-black timber dug-up from the bottom of a quarry in Albury Wodonga, and ringed gidgee, a highly figured dark-coloured desert wattled timber. Difficult and uncompromising to work with, these timbers dictate their terms, and as such are often overlooked in favour of more familiar, malleable timbers. Indeed, Wright’s celebrity as one of Australia’s leading designer-makers is underpinned by his efforts to turn the history of Australian woodworking on its head; from colonial times woodworkers have prioritised European timber species for their familiarity and ease of use. Wright’s furniture designs are the result of perseverance, exploration and commitment to working with Australian native timbers, which historically makers considered simply too hard to use. Evidence of this is found in the colloquial names of many Australian species including ‘iron-bark’ and ‘axe-breaker’.

But how this ancient red gum found its way into Wright’s hands is a story in itself. Telling this captivating story in his essay The Pursuit of Useable Beauty for the The Monthly (April 2009) Gideon Haigh charts its discovery beginning with its un-earthing at the CSR Readymix’s Wodonga quarry (where it was apparently burnt and exterminated to landing on the desk of geology professor Jim Bowler at Museum Victoria for examination and radiocarbon dating (Bowler is famous for discovering Australia’s oldest human remains 40 years ago at Lake Mungo in New South Wales), to Kelvin Barton a seventh generation cattle farmer and woodworker in Wodonga who has been gathering the ancient red gum in the region for several years. Out of sheer respect for the material he lovingly prepares the logs for a select group of craftspeople.

On first sight Brief is simply a beautiful jet-black table – it looks like ebony. But dig a little deeper and it is beguiling. Don’t take my word for it – I suggest you stand in its presence and experience this powerful design and contemporary craftwork for yourself. 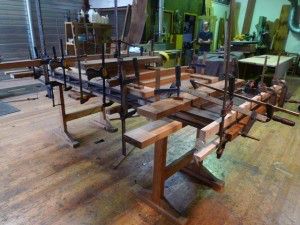 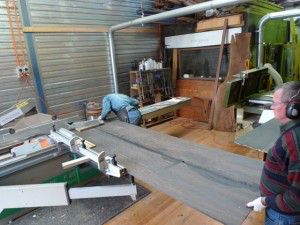 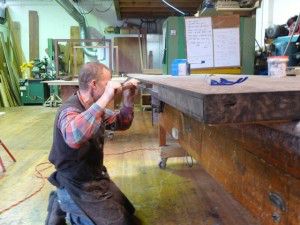 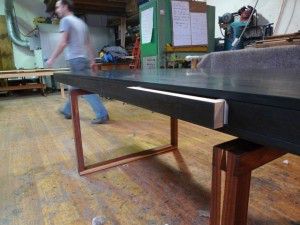 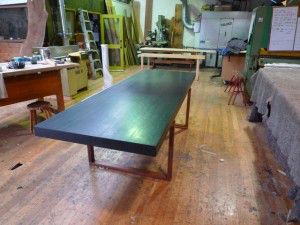