Sitting at a microscope in the textiles conservation studio at the NGV and looking at the intricately embroidered surface of the raised needlework panel of King Charles I and Henrietta Maria is an amazing place to be. This embroidery is the most complex and intricate piece in the exhibition Exquisite Threads, English Embroidery 1600s-1900s.

The level of skill, patience and amazing eyesight needed to manipulate complex and varied materials can fill you with awe when you look at the work with your naked eye. However under the stereo microscope this appreciation increases exponentially and some exciting discoveries can be made about the surface of the embroidery.

Detailed observation is not possible on the underside of the work as it is nailed to a wooden backing board, nor is it possible to access the multiple hidden layers making up this work. How did the embroiderer achieve the works three dimensionality? X-radiography has been a fantastic tool to show us unseen information and expose some of the hidden methods and materials used by the embroiderer over 350 years ago. 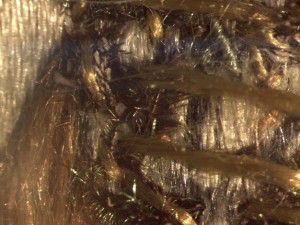 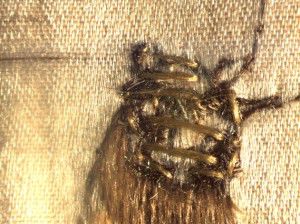 A range of luxurious materials have been identified on the panel including seed pearls, mica, coral and polychrome silks and metal. However when the work was conserved under the microscope for Exquisite Threads an exciting discovery was made. A few tiny glints of iridescent blue and green were observed which had not been seen before. On closer inspection, the distinctive colour and one tiny remaining barb showed that this area was once stitched with beautiful peacock feathers. Raised needlework panels of this period often incorporated insect motifs (indeed our panel includes a butterfly and two caterpillars) and sometimes real feathers (often the tail feathers of a peacock) were incorporated into the embroidery to indicate the insect’s body and/or feelers. However because feathers are fragile and degrade more quickly than the other materials used on the panel, the majority have been lost over time. The remaining tiny shaft and distinctive iridescent feather remnants suggest that the head of this caterpillar was once decorated with delicate peacock feathers. 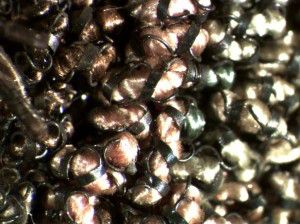 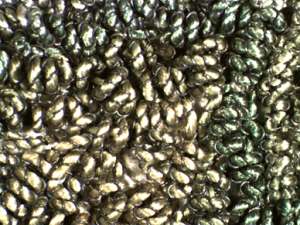 The complex silk and metal wrapped threads are a feature of this work and microscopy was essential to understand how they were produced. The component parts of metal wire, flattened wire and polychrome silks are likely to have been purchased by the embroiderer who painstakingly manipulated them to achieve her specific desires. The image on the left shows a thread which is made in three stages. Firstly a metal wire was wrapped around a silk core, this thread was then wrapped around an additional silk core and finally uniform spaces were wrapped with a strip of flattened wire. The photo the right shows a thread of a similar construction but using only metal wire and silk. Before the embroidery could begin a large amount of time must have been spent by the embroiderer crafting these threads and each thread construction was repeated in a wide range of colours. A lot of effort, but the results achieved with these glinting threads of various colours are complex, subtle and rich. 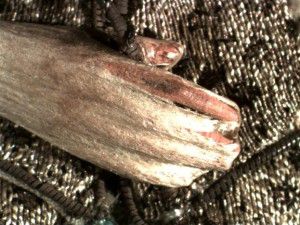 The wooden hands belonging to Charles and Henrietta are also impressive under magnification. The hands are intricately carved and likely to be professionally produced and purchased by the embroiderer who wrapped them in the silk satin fabric to match the fabric used on the faces and foundation of the embroidery. This fabric has worn away in places revealing the fineness of the carved wood underneath. The incredible detail in Henrietta’s bodice, embroidered in or nué technique can also be seen in this image. 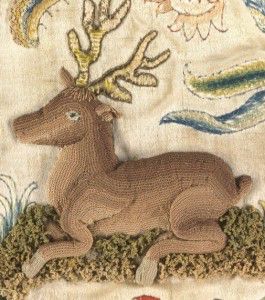 X-radiography made it possible to explore some of the unseen support materials beneath the embroideries surface. Metal wires, which are likely to have been shaped by the embroiderer, were used to create a three dimensional armature supporting the animal masks, as seen in the radiograph of the stag above. The highly radio- opaque metal wire shows up brightly against the organic materials surrounding it. The radiograph of the armature seen in another mask (the leopard) has a definite halo on it, suggesting the wire has rusted and that it is made from an alloy of iron. A layer of linen canvas has been used between the wire armatures and the detached needlelace to create even support and has protected the embroidery from rust staining. 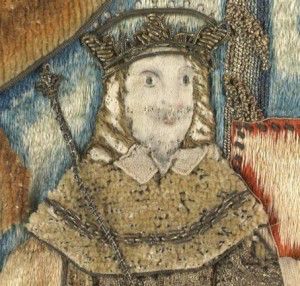 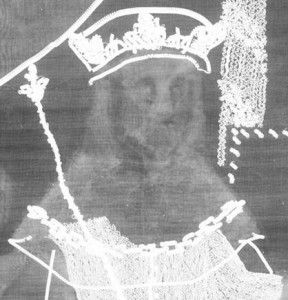 Although the radiograph shows the metal components clearly, the organic components such as silk stitching and padding are less defined and bright. However digital manipulation can be used to enrich the reading of these less radio-opaque structures. Once this was done, the padding used to define the features of Charles I was revealed. The features of the face and hair are stitched to a piece of silk satin applique and placed over a mass of fibres which provide subtle shaping. The bundles of threads cross the face and the nose is formed by a tightly compressed bundle of threads.

One of the more intriguing finds from X-radiography was the presence of a screwed up textile fragment, seen under Charles 1st cape. In a work of such careful planning and execution it seems strange that the embroiderer would have pushed a scrap of fabric under the work for extra support of the three-dimensional element and perhaps this was added at a later time. Conversely, as it was completely hidden, perhaps the embroiderer simply used what she had on hand to achieve her aims.

Evidence of the working practice of the embroiderer was found trapped under one of the tent stitched flowers in a collection of small metal clippings. Was the embroiderer careless and failed to ensure that the surface of silk was free from debris before she stitched the tent stitch motif to the foundation or did she deliberately sweep the clippings under the motif? Each fragment is very small which indicates careful planning and minimal waste of what would have been an expensive and precious material.

Microscopic examination and X-radiography have enriched our understanding of this incredible piece of embroidery and revealed some fascinating information. This blog has discussed some of the discoveries but also some of the questions raised in this analysis, about the working practice of the embroiderer.   Because this embroidery is so complex and multi-layered, it promises to reveal even more secrets with further study and analysis.

Thanks to John Payne, Senior Conservator of Paintings for carrying out the radiography on this piece.