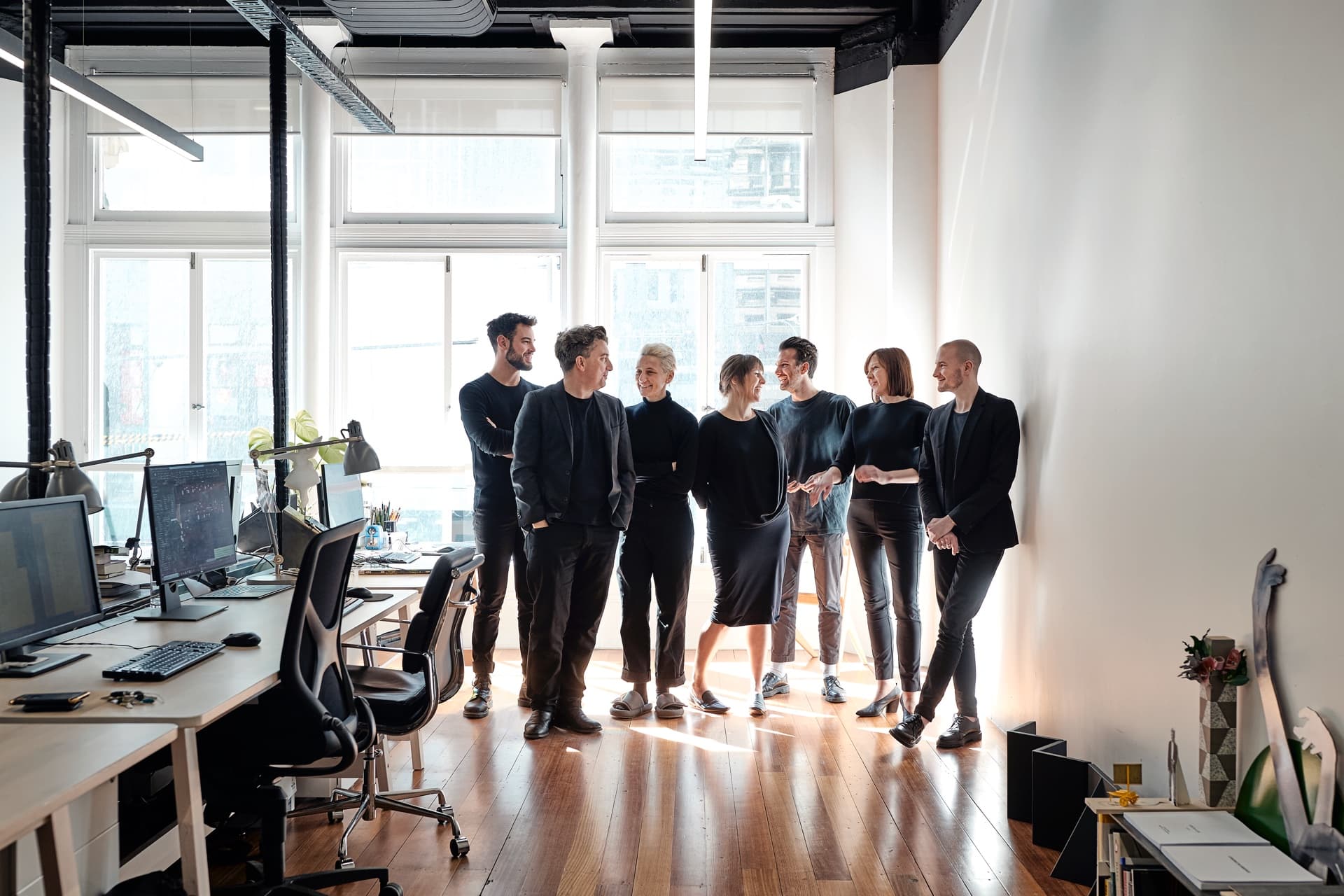 This essay was commissioned for and originally published in the Nov/Dec 2018 issue of NGV Magazine.

In August 2018, the National Gallery of Victoria chalked up fifty years in its iconic Roy Grounds–designed building – that impressive and imposing bluestone monolith on St Kilda Road. Although the occasion has been celebrated with a series of anniversary displays across the building, these will not be all that brings attention to the building and its architect. Indeed, it is a happy eventuality that in 2018, the annual NGV Architecture Commission will foreground the architecture of the NGV, engaging critically with the building’s civic legacy and its role in the collective memory of Melbourne as a ‘cranky icon’ that is equal parts beautiful and brutal; serious and sensual.

Doubleground, the 2018 design by Amy Muir of Muir Architecture and Mark Jacques of Openwork, will become the fourth iteration of the NGV Architecture Commission to be built in the Gallery’s Grollo Equiset Garden. Borrowing forms and fragments from the original building – some references literal and direct, others more subtle and awaiting discovery – Doubleground constructs a new landscape in which visitors can explore and create new memories of the Gallery and garden. It does this, quite literally, by making a new ground plane, which is then manipulated, as described by Jacques, ‘to make the datum of the garden ambiguous’ and to create spaces and surfaces intended to be traversed and occupied. This doubling of the ground plane is a central idea for the designers; it exploits the familiarity of the ground as a common space, and then ruptures it ‘to give people permission to change their normal behaviour’. As such, and despite its temporary construction, Doubleground is no less ambitious, or serious, a piece of design than the massive and immovable NGV itself.

Still, such small-scale architectural works represent a very different kind of architectural proposition from that realised by Grounds in 1968. Indeed, they mark a more widespread shift in the way institutions engage with architecture, towards a view of it as both the infrastructure for culture and a form of cultural expression in its own right. Established in 2015 in conjunction with the new Contemporary Design and Architecture curatorial department, the NGV Architecture Commission was conceived as a vehicle to invigorate the Grollo Equiset Garden and, at the same time, acknowledge the new popularity of architecture exhibitions in the gallery context. In this sense, the NGV follows a growing trend for art institutions worldwide to commission temporary architectural structures for exhibition, resulting in pavilions and installations that signal a new rapport between art and architecture in contemporary culture.

But, as Doubleground attests, the brief for the NGV Commission marks it as distinct from other national and international programs for temporary buildings, inviting submissions that engage with architecture in its broadest sense. In particular, the NGV is focused on speculative ideas as much as forms and structures, and actively courts interdisciplinary design teams. This year’s designers, for example, operate across multiple disciplinary fields,as well as having experience in exhibitions and installations. Muir first trained in interior design before moving into architecture and was involved in the exhibition design for Convergence (2014, RMIT Design Hub) and Melbourne Now (2013–14, NGV), while Jacques came from a background in visual arts and design before taking up landscape as a preferred medium. He was also part of the design team for the 2016 NGV Architecture Commission. Both have developed a studio practice that creates a firm place for speculative projects and teaching. The NGV Architecture Commission was therefore an opportunity to bring these disciplinary contexts into dialogue, and even confrontation. Jacques makes the point more sharply: ‘There is a belief that the Commission belongs to a certain typology, maybe it is a pavilion. But, there is no typology of pavilion, it’s a ghost. You’ve got to bring a set of ideas to it’. According to Muir, ‘It’s an incredibly exciting brief because of that opportunity … It is a lovely mix between architecture, which has a long gestation period, and exhibition design, where it is fast and furious. I find it very receptive to ideas’.

The Commission also demands a contextual response. This is necessary on the one hand to deal with the practical constraints of the garden site, which actually sits atop a roof deck structure, but it is also a rebuke of sorts to the more familiar contemporary pavilion phenomenon. Past iterations of the Commission have addressed this requirement in various ways. In 2015 John Wardle’s I dips me lid celebrated the much-loved Sidney Myer Music Bowl across St Kilda Road in Kings Domain, while in 2016 [email protected] Architects replicated a Burwood carwash in Haven’t you always wanted ... as a speculation on the capacity to make a civic realm in outer suburbia. By contrast, 2017’s Garden Wall by Retallack Thompson and Other Architects took the Grollo Equiset Garden itself as a determining context, and employed site-specific strategies familiar to installation art practices to re-contextualise the array of sculptures in the garden and remake it as a space of encounter and display.

Described by Muir as an ‘embedded landscape’, Doubleground purposefully engages the existing architecture as both an intellectual idea and as a sensual experience, making Roy Grounds’s building both its subject and interlocutor. Particular aspects from the original Grounds building are affectionately recalled – the timber ceiling in the foyer, the zigzag wall, the golden carpet – and are reinterpreted in a series of exaggerated or intensified material and spatial experiences that admit the indeterminate quality of the garden context as much as the unreliability of memory itself. Structurally, the design avoids the need for traditional footings by using the mass of the constructed landscape as ballast.

At another level, Doubleground also engages with the role of the three thematic courtyards that were a defining feature of Grounds’s original design, and lent a geometric clarity to the building’s plan and circulation. Muir and Jacques were particularly struck by this emphatic dedication to open space, a ratio that has since been eroded by the evolving spatial requirements of the Gallery. They saw an opportunity ‘to reflect upon what was originally there and talk about that original intent and how that might be reflected in the Garden’. In doing so, Muir and Jacques want to reclaim the idea of the courtyard for the NGV, and at the same time recognise the new circumstances of such a gesture. Most interestingly, while Grounds’s courtyards were crucial orienting spaces in the original gallery plan, in Doubleground Muir and Jacques reinvent the courtyard as a space in which to lose oneself in reverie. They explore how the idea of a courtyard might be defined through affect rather than form, as a collision of interior space and landscape.

Doubleground inevitably invites such multivalent readings, and the designers’ strategy of doubling the ground plane and echoing aspects of Grounds’s original design will be readily appreciated. But more than this, Doubleground breaks new ground in the trajectory of the NGV Architecture Commission, by entering into a conversation with the short history of the Commission itself and in its prioritising of a contextual approach, as much as the original building. As Jacques suggests modestly: ‘Maybe what we’re doing could be seen as part of an evolution of the NGV commission’. But, more than this, the ambition of the project to foreground a new kind of engagement with architecture at the NGV brings these architectural gestures into a common perspective, all the while focusing attention on the institutional and physical contexts that ground such architectural experiments.