Film and photography are a fascinating adjunct in Mid Century Modern: Australian furniture design.  They provide glimpses of the context in which furniture was used, and a sense of the impact of new ways of living in mid-century homes and workplaces.

Among the photographs included in the exhibition are a number of images from what are known as the Buchan Group albums held in the NGV Collection.  The Buchan Group of architects were established in Geelong in the 1890s and in 1945 opened their first Melbourne office. At this time they were renowned for their striking ‘modern’ approach to architectural design and they were behind many of the great mid-century buildings in Melbourne. Fortunately, as many of these wonderful buildings are now gone, they documented their work in a series of four albums comprising over 200 photographs. Many of the leading architectural photographers of the day including: Wolfgang Sievers, Max Dupain, Helmut Newton and Mark Strizic; were commissioned to photograph their innovative buildings, interiors, fittings and furnishings. And this included furniture.

The majority of the photographs in the Buchan Group albums were taken by Wolfgang Sievers. Sievers was born in Berlin in 1913 and as a young man studied, and later taught, photography at the Contempora School for Applied Arts.  He left Germany on the eve of the Second World War eventually arriving in Australia in 1938. In the post war period his Melbourne studio came to prominence for work in the areas of industrial and architectural photography. Sievers had always had a passionate engagement with the built environment. Reflecting on his career in architectural photography he later wrote, ‘Architecture plays a decisive role in the nation’s development (as in our individual lives) and in Australia we were lucky to have some outstanding architects in the immediate post war period.’ Sievers’ photographs eloquently demonstrate his familiarity with, and mastery of, the stylistic devices of the New Photography which championed the use of sharp focus, the arrangement of bold simplified forms and dramatic vantage points. All of which were perfectly suited to showing modern buildings and interiors to their best advantage.  Sievers also recognised the importance of the relationship between architects and furniture designers at one time singling out architect Alex Jelinek and furniture designer Schulim Krimper as ‘a fine example of the collaboration’. Consequently the furniture shown in his photographs of interiors was presented not as decorations, but as integral elements if carefully considered and designed environments. 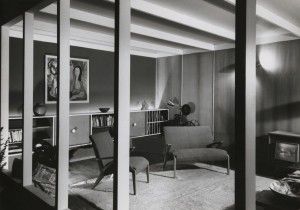