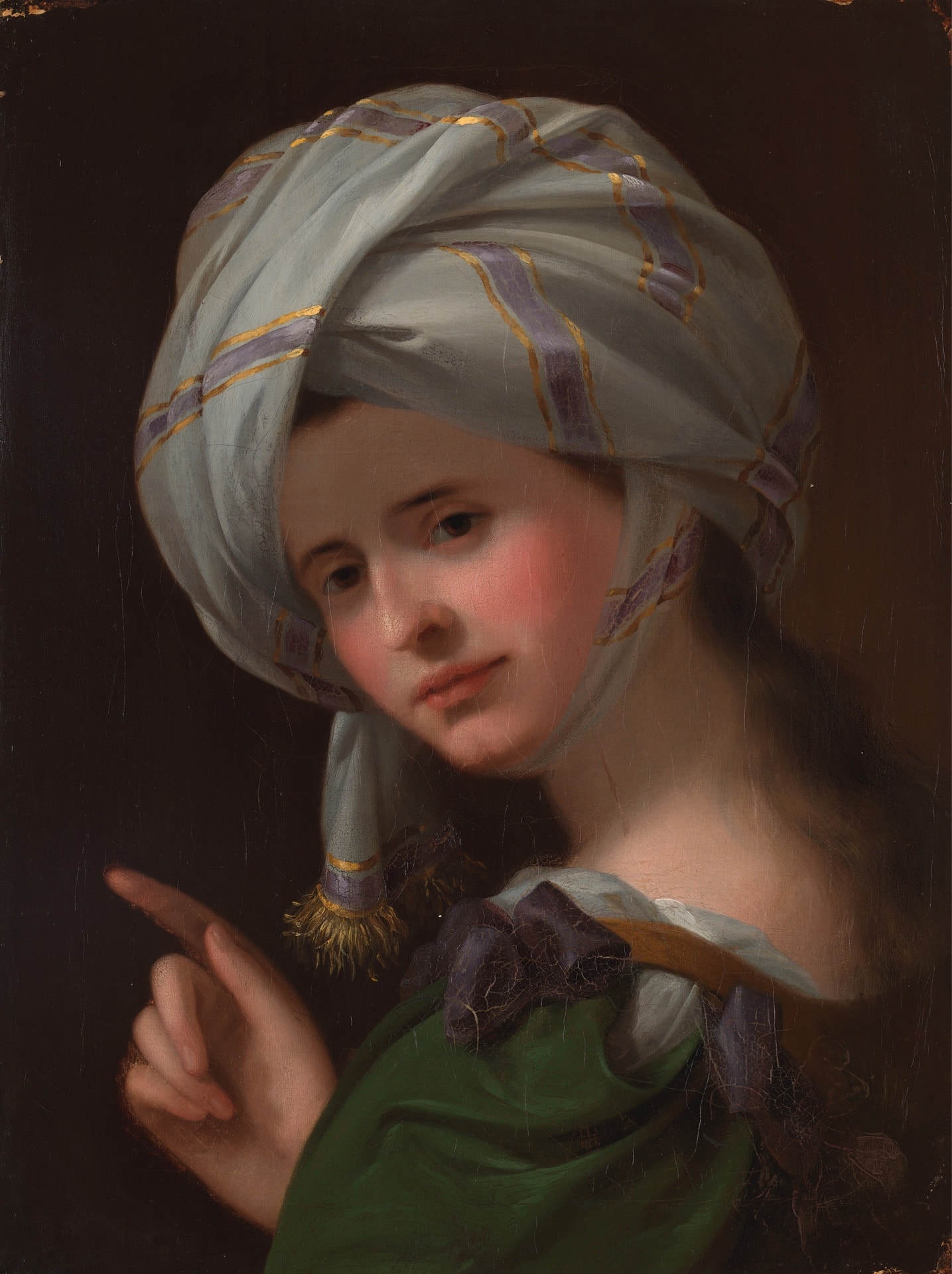 In 2019 the National Gallery of Victoria acquired a fascinating portrait by the unheralded eighteenth-century Scottish portrait painter Anne Forbes (1745-1834). Generously gifted by Krystyna Campbell-Pretty, this painting is a valuable addition to the NGV’s outstanding collection of eighteenth-century British portraiture, not least for the fact that it portrays the remarkable Lady Elizabeth Hamilton (1753-1797).

According to an inscription on the back of the painting the portrait was painted in Rome in 1771, dating Lady Hamilton at just eighteen years old when she sat for the artist. In the portrait she turns to the viewer wearing an exotic turban, a dark green dress and a low-neck white chemise – not the regular clothing worn by a young English peeress. In this respect the painting bears a striking resemblance to another work in the NGV Collection, Joseph Wright of Derby’s dashing self-portrait (c.1765-68). Similarly to Anne Forbes, Wright lived and worked in Rome during the same decade, and the resemblance between the two paintings extends even to their materials and techniques. Both are painted on a similar type of linen canvas and both painters used a similar priming layer consisting of gesso with added lead white. Lady Hamilton’s fame during her lifetime derived initially from her charismatic beauty and her role as a trendsetter in English fashion. The second half of her life was fatefully marked by her leaving her husband and three children in 1778 for a very public affair with the 3rd Duke of Dorset, making her an outcast from English society when her husband refused to divorce her. Lady Hamilton fled to Europe for several years to escape the ostracism from her social peers but eventually returned to England, though she never regained her former status and was not given the opportunity to marry the Duke of Dorset.

These biographical details may give us some clue in regards to a puzzling feature of the painting which came to light during the painting’s recent conservation treatment. When the painting arrived in Melbourne, it had not been cleaned for a very long time; it had several layers of old, discoloured varnish and in the background, thick layers of restorer’s overpaint. Brown varnish and old overpaint are quite commonly found in older paintings, however as they were gradually removed, an eye-popping feature emerged from the shadows: the Lady’s right hand pointing leftward to something outside the window of view. The hand had been deliberately painted out by a restorer at some time in the past. The later suppression of details in a painting is uncommon, but when it appears it is usually done for an identifiable reason, for example to mask some damage to the surface, or to cover a part which is considered awkward for visual or social reasons. There is no evidence of damage, so it appears to have been done to hide the gesture. In this particular case it is important to consider the meaning of the pointing gesture that is being made by Lady Hamilton. If the portrait were one half of a pair of paintings, then it might refer to another person or scene in the accompanying painting. Yet we know that the painting was exhibited at the Royal Academy in London in 1772 as a single work so that seems an unlikely explanation. Instead the gesture was most likely intended as a pointer towards a future event in the subject’s life, as seen in numerous other examples of paintings on a biblical theme in which the gesture refers to a later episode in a story. In the case of Lady Hamilton, when initially painted this gesture might have been intended as a confident expression of a brilliant future ahead, but in later years might have been seen as a source of sadness for the owners of the portrait, who were presumably her family and heirs.

There is one final twist in the story of this portrait of Lady Hamilton. The painting is now on display at the NGV, where in a nearby gallery hangs Johan Zoffany’s portrait of Elizabeth Farren, whom Lady Hamilton’s jilted husband the Earl of Derby married upon the death of Elizabeth Hamilton in 1797. There is now no better place in the world to tell the story of this woman’s life.