When Horace Buttery cleaned the Crossing of the Red Sea in 1960, he encountered a painting which had suffered surface damage from previous cleaning attempts.

He knew his job would be to reconcile the well preserved parts of the painting with those areas which were permanently affected by paint losses and abrasion to the surface, particularly in the sky. He was faced with the task of trying to recover some of the lost appearance of that crucial component of the painting. It is possible, but not likely, that he had access to copies of the painting that were made in the late seventeenth and early eighteenth centuries.

These copies could have provided him with some help in retrieving certain details which were now lost from the original.

Crossing of the Red Sea was copied a number of times during the sixty years (c1680-1741) it was held in Parisian collections, a testament to the reverence in which the painting was held by French artists and collectors. Buttery might have known that the image was turned into an engraving by the French artist Etienne Gantrel (1646–1706). 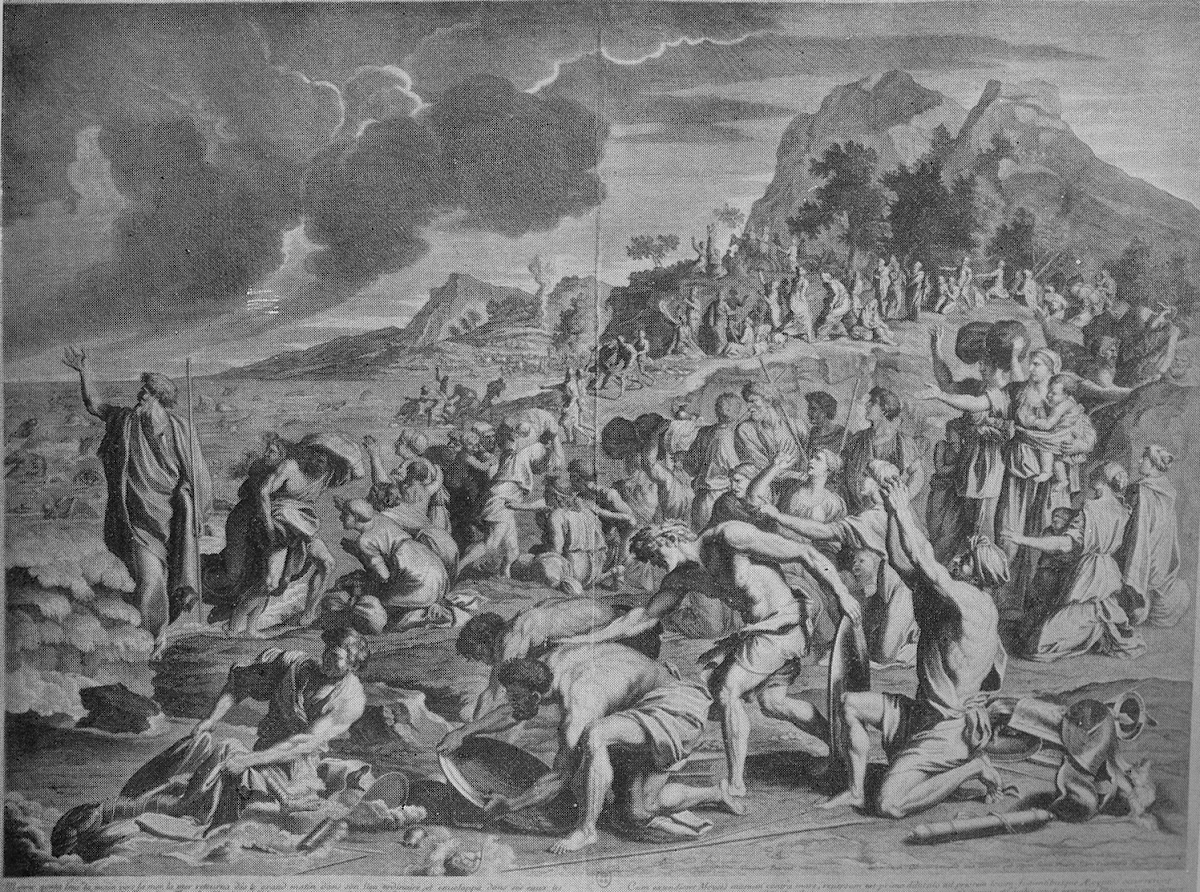 The original engraving shows Poussin’s image in reverse, for Gantrel copied the image first onto a copper printing plate which would then be used for printing copies onto paper. Seen this way it is at first hard to make a direct comparison with the painting, so with the benefit of digital imaging we can flip the engraving to match the composition of the original: 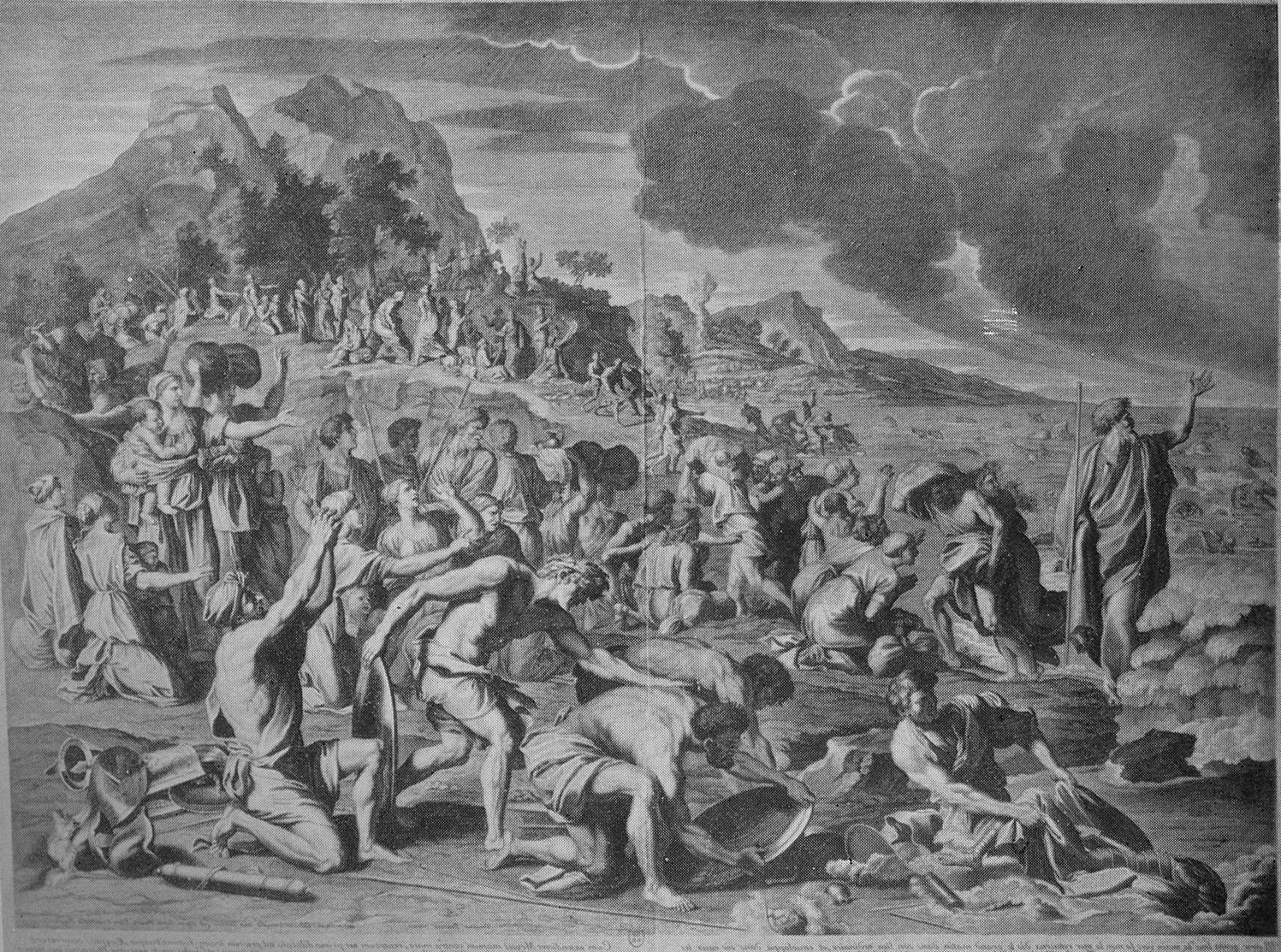 Gantrel’s version of the clouds with details of lightning appears to be supported by the other version of the painting which Buttery may have known about: the tapestry made of the painting by the Gobelins Tapestry workshop between 1684 and 1691:We can see that Gantrel’s engraving closely follows Poussin’s original with one notable exception: the pillar of fire at the extreme right edge of the image has been omitted. More about this in a later post, but what is most striking about the engraving is the sky. We can see that Poussin’s sky – at least according to Gantrel – once had crackling thunder and heavy rain falling over the sea.

Moreover it appears to tell us that the lower part of Poussin’s clouds were dark and heavy, while the upper clouds were paler and lined with light. Very different indeed from the uniformly dark and heavy bank of clouds we now see hanging ominously over the top half of the painting. 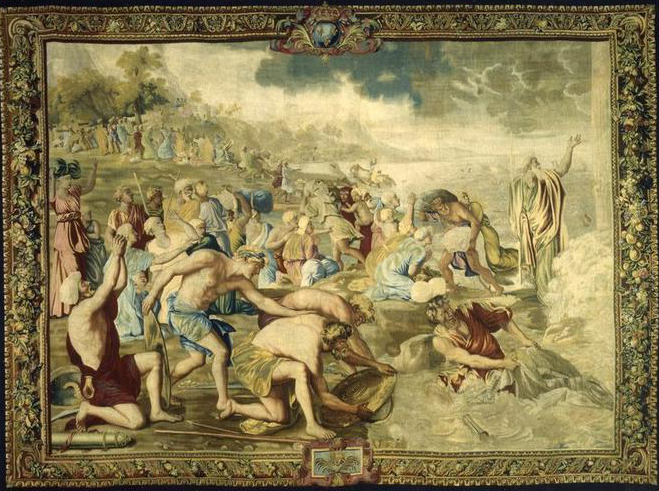 It seems likely that Buttery did not have access to these copies of the Crossing of the Red Sea, or if he did, then he chose not to rely on them for his reconstruction of the damaged parts of the painting. Instead he chose to repair what remained of the image in the best way that he could, rather than attempt a reconstruction of what was lost. This circumspect approach is what most conservators feel is the most prudent thing to do where critical information is almost wholly lost from a painting. It is rarely considered advisable to reconstruct lost passages without having reliable information about what is missing.

This tapestry (seen here also digitally flipped from its original appearance) is less faithful to the original than Gantrel’s engraving, yet it too appears to show a more turbulent sky with the clouds defined by bright outlines.

A revelation: the X-ray of Herbert Badham’s Paint and morning tea (1937) Encompassing an empire Beneath the surface: X-rays reveal a different story Brilliant vision: the making of Van Dyck’s dazzling portrait of Rachel de Ruvigny