Removal of varnish and old retouchings Well, first it depends on the type of varnish being removed and the vulnerability of the underlying paint. Critical to the ability to safely remove varnish from most paintings is the condition that oil paint is different to varnish resin in terms of chemical structure. We can exploit this difference by selecting solvents which affect the resin without breaking down the structure of the oil.

For many Old Master oil paintings covered with a traditional varnish such as dammar, paintings conservators will frequently use a blend of an “active” solvent, such as acetone or possibly isopropanol, with a “diluent” solvent such as mineral spirits. The diluent solvent has the effect of controlling the solubilizing of the varnish by the active solvent; essentially, it slows down the rate of removal, allowing the conservator to work in a measured way.

If the paint layer underneath the varnish proves to be highly vulnerable with these types of organic solvents there are other cleaning systems available to the conservator. However, the vast majority of pre-1800 paintings are cleaned with solvent mixtures. For the Crossing , a solution of one part acetone to one part mineral spirits was used for the first pass of cleaning, in which the bulk of the varnish was removed. For the second pass, the amount of acetone was reduced, and for the third stage of scalpel removal of old restorer’s retouchings, only mineral spirits were used to help wipe away the debris.

The three main stages of cleaning were completed in about a month. This proved to be relatively straightforward as there weren’t many layers of older varnish and retouchings to remove. Clearly, Buttery had cleaned the painting thoroughly in 1960. Poussin’s thin and smoothly applied paint surface also aided a quicker varnish removal; where artists have applied paint in thick and textured brushstrokes there is a greater likelihood that old varnish will become lodged in the recesses of the textured paint, and over time these old residues can discolour and become harder to remove.

The visual impact of the varnish removal was appreciable, but not dramatic. Certainly not as stark as this recent cleaning of a sixty-year-old varnish we undertook from Giambattista Tiepolo’s & nbsp Finding of Moses : 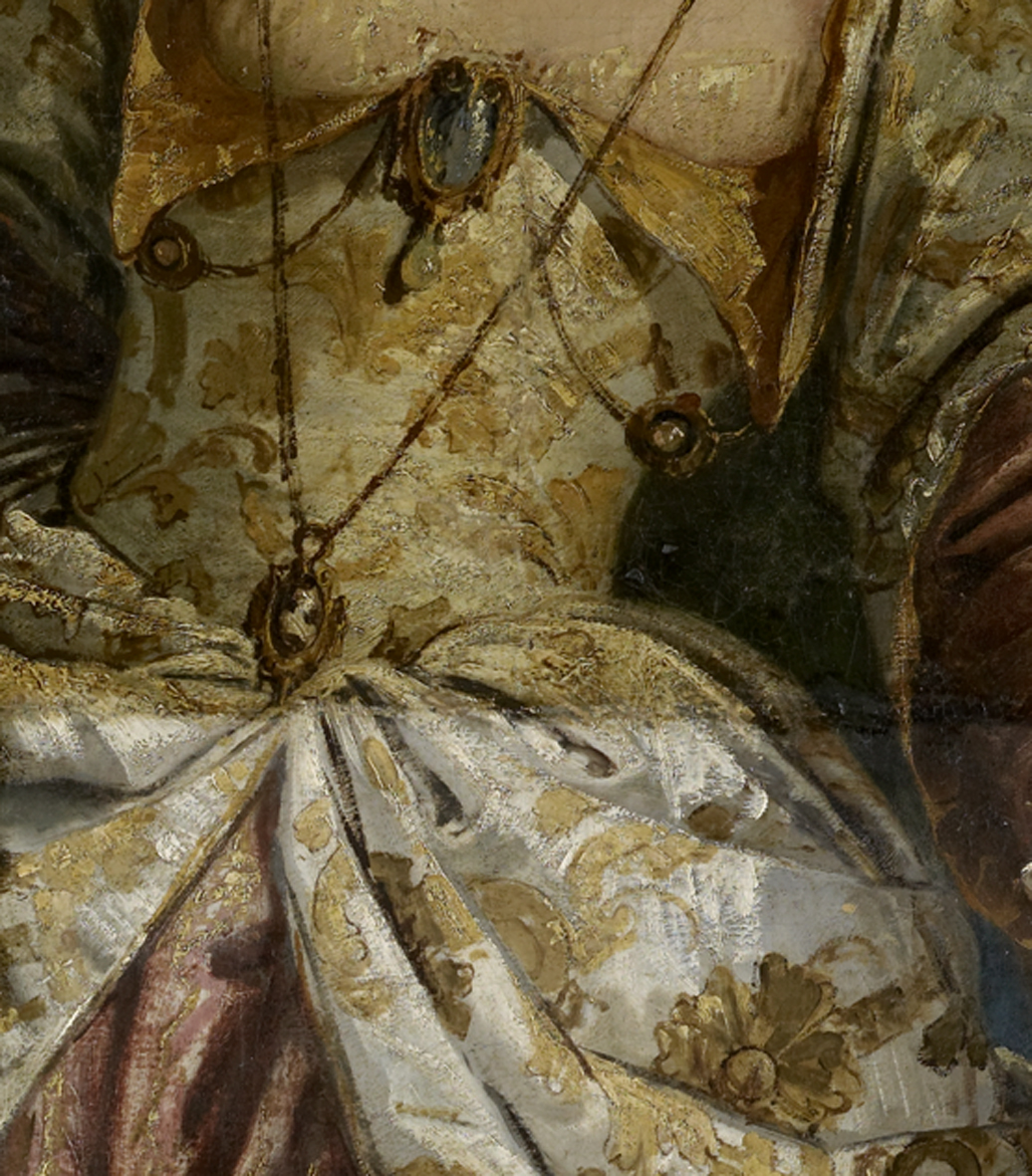 With the Poussin, the most visually striking thing about the cleaning was not the removal of the varnish but of the old retouchings. As we had anticipated, the dark clouds on the right side of the painting were worn right down to the priming layer: 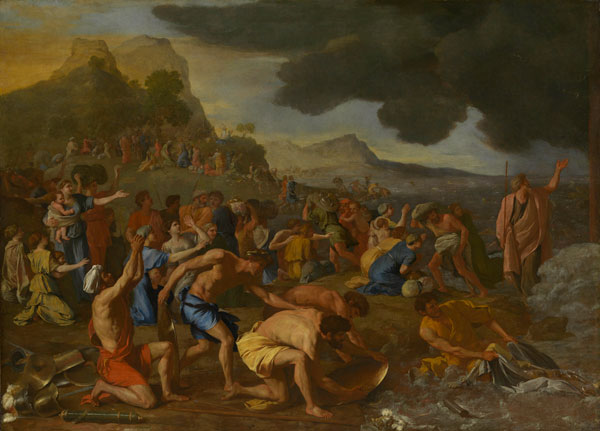 Above: the painting before treatment. 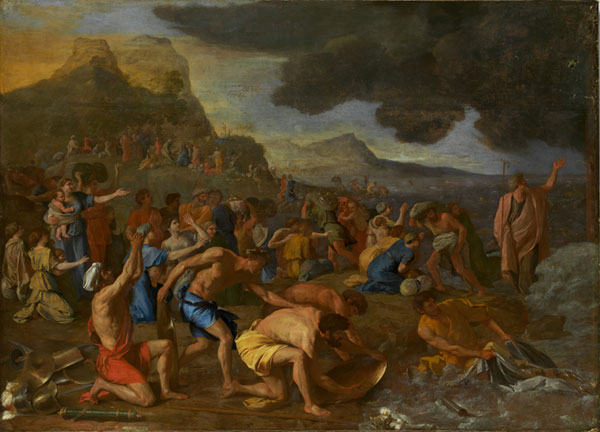 Here is the painting after removal of the varnish and old retouchings.

In addition to these we also noted the full extent of another type of old damage to many of the areas of flesh-coloured paint. Several of Poussin’s thinly applied skin tones displayed numerous small pit-like losses, leaving the surface looking broken and with less definition: 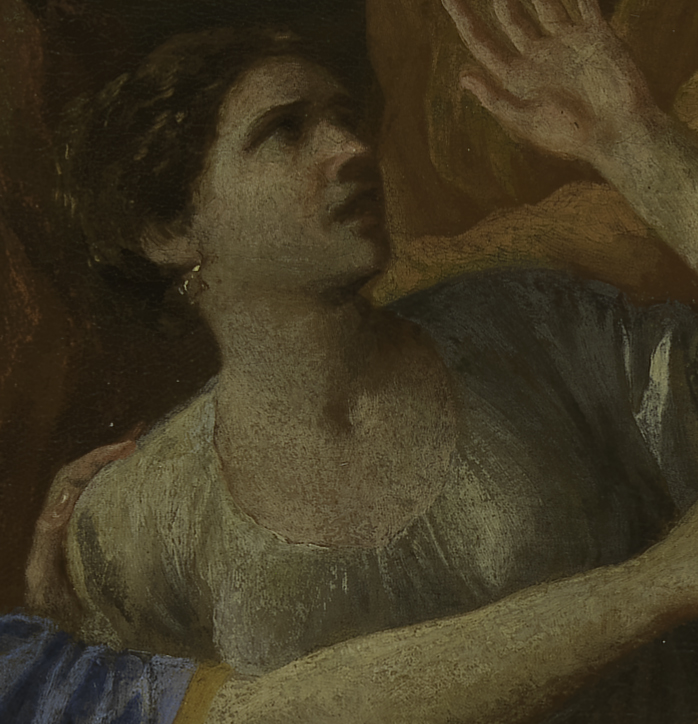 Above is a detail of one of the figures before treatment. 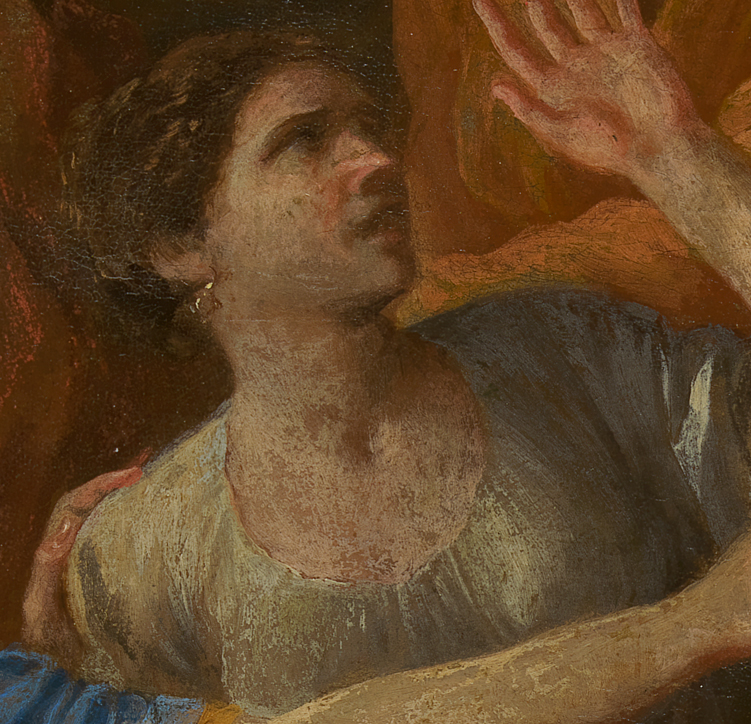 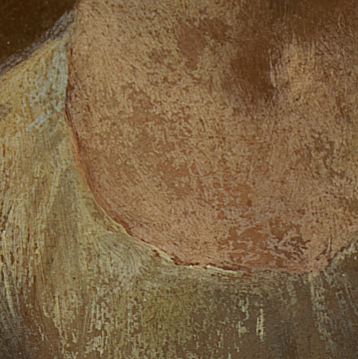 The enlarged detail above shows just how many of these losses there are in the surface, creating a visual chatter which makes it hard for the eye to read Poussin’s original brushwork.

With the varnish removed the full extent of the work which lies ahead has been revealed . The painting needs to be revarnished, and then inpainted in the areas which have suffered the most damage. In areas such as the clouds, a considerable amount of inpainting will be required to mask the damage and reconcile them with the best preserved passages, so that the painting displays a consistent level of surface condition.

‘Unfolding’ Japanese screens The paper trail: a study of watermarks in the National Gallery of Victoria’s collection of Albrecht Dürer prints A Brush with Fidelity: Three works by Eugène von Guérard Picture perfect: Pictorialism and its processes