Some changes in the painting

Because many paintings survive for generations some may think they are resistant to the effects of time. This is not so. Paintings age much like people, albeit at a slower rate. While they both might retain their essential features over time, their appearance changes markedly from their youthful prime. Certain parts change colour, wear out or fall away; overall shape changes, surfaces become worn and creased. Without constant maintenance both become increasingly fragile.

We can be sure the Crossing of the Red Sea does not look the way it once did. All paintings are affected by the passage of time, in both structure and appearance. There is one aspect of change in Poussin’s work which has been frequently commented on: a shift in the painting’s tonal values. By this we mean that the visual balance between the light and dark tones seems to have changed over the centuries. The belief is that many of Poussin’s paintings are darker in appearance than they once were as a result of the increasing transparency of some of his pale pigments and the artist’s technique, with his paint applied in rather thin layers.

It is quite possible that the water washing against the shore in the lower right of the painting is less prominent than it once was, and that the earth colours of the foreground shore area are also darker than originally intended. Several pigments are known to change appearance over time: some blues can turn black, others turn grey, some greens can change to brown. The blues in the Crossing of the Red Sea appear much darker than the same blues seen in a seventeenth-century replica of the painting, but for the moment we cannot quantify this change. Scientific analysis later in the year may help give us some indication about how much change has taken place.

Knowing about these types of changes can help us get a more informed understanding about Poussin’s intentions and can perhaps steer us away from any misconceptions which might otherwise arise.

Changes in the painting’s structure

There are other changes in the painting which are not apparent to the general viewer. 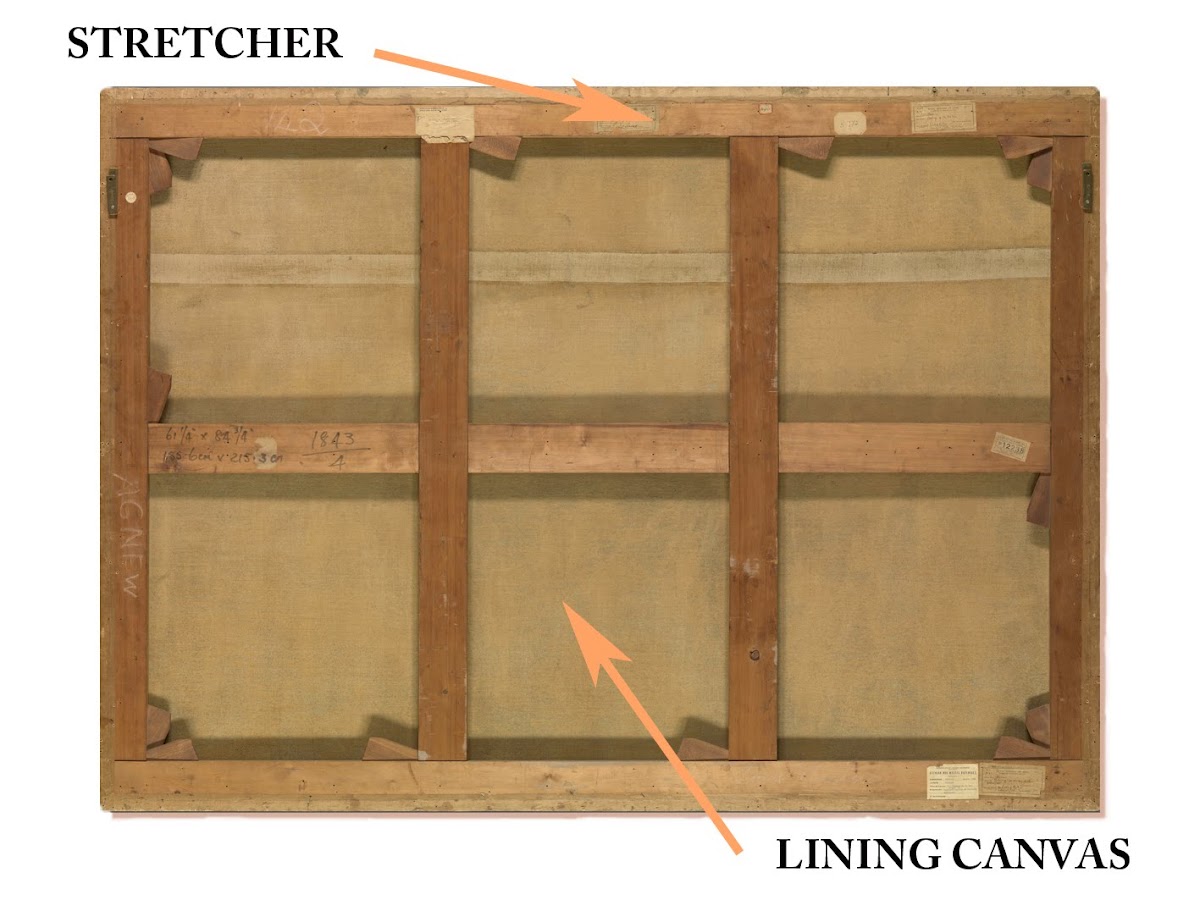 This photograph shows the reverse of the Crossing of the Red Sea. No visible part of it is original to the painting. The wood stretcher which holds the canvas probably dates from the second half of the nineteenth century. Stretchers are replaced when the previous one is damaged or inadequate to support the weight and shape of the picture. It is quite possible that the stretcher it replaced was also not Poussin’s original.

The canvas visible on the reverse also probably dates from the nineteenth century. This is a lining canvas, which was bonded to the back of the original to give it greater strength and the rigidity needed to prevent the paint and priming layers from breaking up.

The thin horizontal strip of canvas in the upper part of the reverse is an additional piece of canvas added to provide further rigidity over the seam of a join in the original canvas. Poussin’s original canvas is made up of two pieces of canvas sewn together – as we will see in a later x-radiograph. With time and movement, the join line has caused a horizontal crack line visible from the front of the painting, so the strip was applied over the reverse of the lining to prevent further weakening of this vulnerable area. 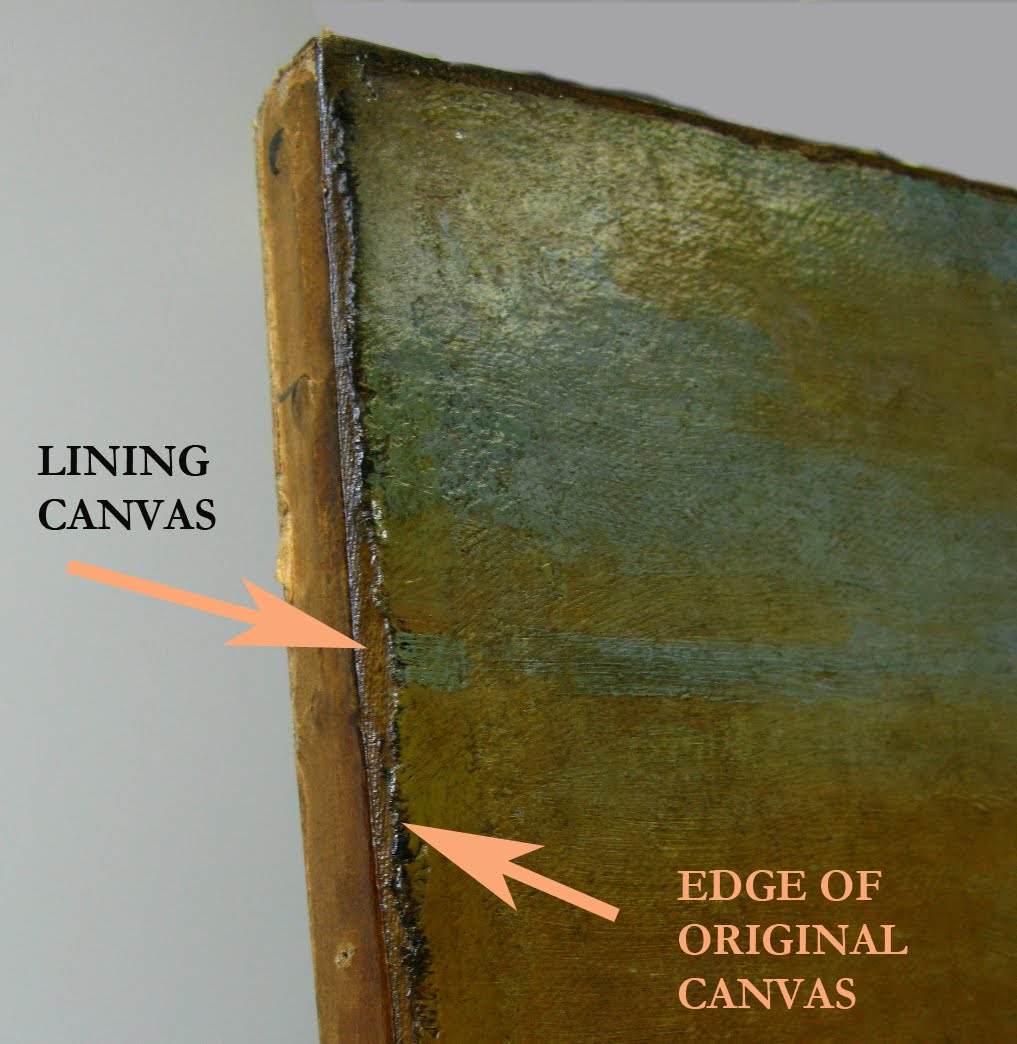 A detail of the top left edge of the painting.

The photo above shows how the original unpainted edges of the canvas have been trimmed, so that the painting is held onto the stretcher only by the lining canvas. We always check this feature during the examination to determine whether the painting has been cut down. If the original edges are intact, then we can say that the painting retains its original proportions. Sadly, it is not uncommon to find paintings which have been cropped into a smaller size. Though the edges of the Poussin have lost their original unpainted edges, we know by other means that there has been no cropping of the painted surface. In the next post we will look at how the painting was x-rayed.

The paper trail: a study of watermarks in the National Gallery of Victoria’s collection of Albrecht Dürer prints Two New Attributions: a Tocqué and a Bellotto in Melbourne Conservator Insight: Japanese Modernism display systems Bringing to light Hans Heysen’s Sunshine and shadow